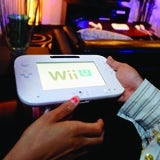 The second generation console features a controller with a 6.2 inch screen that interacts with the TV like the previous Wii remote, but can also be used to play independently of the TV as a stand-alone device.

Nintendo president Satoru Iwata said at the launch event at the E3 gaming show in Los Angeles yesterday (7 June): “Up until now, home console games had to occupy the TV screen in order to be played.

“The new controller for Wii U, with its 6.2 inch screen build in, means you won’t need to give up your gameplay when someone else comes in the room and wants to watch a TV programme.”

Developers at the event praised the Wii U as a “game changer” for the video games industry.

Wii U is compatible with the original Wii, meaning the new remote can be used in tandem with the older console.

Popular gaming franchise Mario Super Smash Bros will be one of the first games to appear on the new console.

Wii U is expected to be released in the UK in April 2012, although pricing details have yet to be announced.

Nintendo has sold more than 86 million Wii consoles to date so far, although sales have slowed in recent months. The company’s operating profit fell 52% to 17.1bn Yen (£130m) for the year ended 31 March.

Sony unveiled its latest console at the E3 show yesterday (7 June), PlayStation Vita, the successor to the PSP.