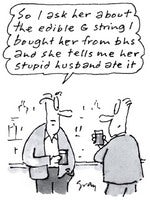 Now the phoney war is over and we know we are in a bitter conflict with the implacable foe of recession, stories are filtering back from the front line. Stories of mounting casualties, with BT, Virgin Media, Yell and GlaxoSmithKline reporting heavy losses; of devil-may-care courage in the face of adversity, with banks rescued by the taxpayer throwing lavish parties; and, miraculously, of lives saved, with Gordon Brown rising majestically from the dead and inspiring us all with his vision of saving not just dear old Blighty but the whole damn world.

As always when the blast of war blows in our ears, we British are at our doughty best, mocking the enemy, smiling through, and making light of every setback. City investment bankers, though waist high in the bodies of their fallen comrades, are buying white shirts and wearing neck ties. Gone is the smart-casual insouciance of the former masters of the universe; now is the time to defer to bourgeois convention and strive to appear employable. Middle-class women are steering their four-by-fours not, as was their wont, in the direction of Waitrose and Marks & Spencer, but into the badlands of Aldi, Lidl and Netto where life is cheap. Retailers who in the weak piping times of peace imported goods at rock-bottom prices from China and sold them on at astronomical mark-ups to shoppers awash with borrowed money, are peering out hollow-eyed from behind sandbags, but talking brave. For instance, Ray Kelvin, chief executive of fashion chain Ted Baker, says that although October was bloody he is unbowed. Pluckily, he predicts buoyant sales of Ted Baker branded socks as Christmas gifts, though many a likely recipient may see that as collateral damage.

As so often in the past when this island nation has stood at the crossroads of history, it is our womenfolk who display the greatest resolve. Today is no different. Lassies who until now have made do with the microwave and the telephoned take-away are hauling up their slacks and peeling vegetables. Meanwhile, sales of sewing machines and knitting needles are reported to be rising, heralding an austere utilitarianism of homemade trousers that look like shirts and woolly scarves that look like livid pythons.

But amid all the stiff upper lips and unbowed heads, one man stands out like Horatio at the bridge, banner flying high, sword dripping red, eye glinting defiance. He is Sir Philip Green, billionaire owner of Arcadia and Bhs, whose audacity is a byword wherever haberdashers gather, and whose merchandising prowess arouses a superstitious awe among those who bustle at his beck amid the rattling coat-hangers and ringing tills.

Small wonder that at a time of national crisis such as this all eyes are turned to him. Of his many qualities, the greatest is surely his resourcefulness, and in this he yet again stands supreme. Who else could have devised a masterstroke that with a consummate skill and artistry slays so many foes at a single blow?Among the Christmas shelves at Bhs, bejewelled in tinsel, you will see nipple tassels, edible g-strings and breast-shaped stress relievers, every one of these items a vital piece of ordnance in the battle not only against recession but also those fearful adversaries obesity and global warming.

Consider the multifaceted genius of edible underwear. The customer buys the g-string, creating a much-needed boost to demand in the economy; in wearing it, she derives little warmth, and must perforce run about to get the blood flowing to the benefit of her health; when the time is right she discards the garment; but rather than squander the world’s natural resources on heating water and using detergents, she feeds it to her partner and he (or she) benefits from a bowel-benefiting intake of roughage. Masterly! Nor is that all. Nipple tassels were not made to stand idle. It was not for limp inertia that the sweat shops of Quangdong Province throbbed their output of articulated tassels. It was for wild rotary motion. The nipple tassel, like the hula-hoop before it, requires bodily exertion to achieve its full kinetic effect, especially when one (they are used in pairs) rotates in a clockwise direction and the other in a counter-clockwise direction. The user’s heart rate rises through exertion and so too does that of any passive witness of whom no exertion is required.

I admit that I do not know how breast-shaped stress-relievers work, but if they are OK for Sir Philip, they are OK by me. When our very survival is at stake this is no time to cavil.