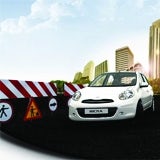 The car marque says it is rejecting the traditional convention of launching a model with an above the line campaign in favour of a more personalised approach after carrying out research into Micra’s core customers that found they develop a close relationship with their car because they are more focused on the freedom owning a car brings than the pleasure of driving.

The “In Sync with the City” launch campaign aims to position the Micra as an ideal city car that is in-sync with the driver, and their surroundings, by demonstrating the “thoughtful technology” developed to “help drivers in everyday situations”.

Yasmin Al Jeboury, Nissan CRM project manager, says: “The insight gained from the research enabled us to reject launch conventions, such as starting out with an above-the-line campaign, to develop an integrated programme based on a highly targeted CRM foundation.”

The digital and direct campaign has been developed by Tullo Marshall Warren (TMW). It will be supported with regional press activity and media partnerships with BBC magazines, The Telegraph, The Daily Mail, and Classic FM to drive awareness of the new Micra before and after the launch.