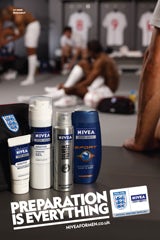 Based on ‘Preparation is everything’, the creative concept developed by Draftfcb London, the campaign focuses on the preparation that goes on before a game.  The core idea behind the campaign positions the brand as part of the team’s essential grooming kit.

The creative expression of ‘Preparation is Everything’ is portrayed through the ads which will feature Nivea for Men products photographed inside the changing room.

The campaign launches in May leading up to the 2010 FIFA World Cup. Press ads will run in national press, football magazines and men’s magazines.  As part of the wider campaign, digital outdoor posters will be displayed in Piccadilly Circus and Canary Wharf.

It builds on Nivea’s four-year deal with the FA to become the Official Men’s Grooming Supplier to the England football team. Octagon and Draftfcb have partnered to make this happen.

Beiersdorf marketing manager, Andrew Rawle, says: “We are very proud to be an Official Supplier to the England football team. This association with the team aims to make male grooming more accessible and we believe that Draftfcb’s concept, “Preparation is Everything” reinforces the relevance of the Nivea for Men brand with the audience.”

“Preparation is everything is a proposition that offers Nivea for Men plenty to engage fans with, not just in the run up to the 2010 FIFA World Cup but through the UEFA Euro 2012 qualification too,” adds Mark Fiddes, executive creative director of Draftfcb London. 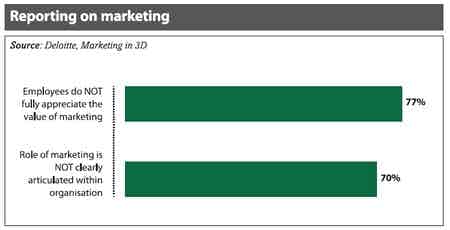 Marketing metrics might look easy to obtain, yet the huge volumes of data generated by reporting systems do not always add up to a true insight. David Reed finds out how marketing can give the board a more unified view of its performance