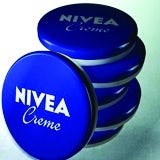 Nivea is spending €1bn (£880m) on its biggest ever global marketing campaign that will push a ’100 Years Skincare for Life’ message.

Pop star Rihanna has signed up to be the voice of the brand’s 100 year celebrations and her California King Bed track will accompany the international anniversary campaign.

Beiersdorf says a new direction is being created for the brand based around a ’better skincare makes life feel better concept’. The campaign will launch in the UK on May 27.
Markus Pinger, the Beiersdorf board member responsible for brands, says the campaign is based around the premise that people are only “comfortable in their skin if they are happy about the way they look.”

Creative for the global campaign is based around the values Nivea claims it represents, including trust, honesty, reliability, quality and family. Other campaigns featuring the key body car product lines – Visage, Body and Deo – will follow the anniversary campaign.