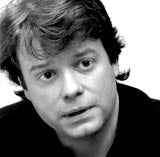 The first thing you notice about Mike Phillipson is his clothing. Contrary to traditional dress codes, he has travelled to the offices of Smile in a formal shirt and then changed into something more casual when he arrived. In this case it’s what the bank calls its “team togs”: a black, open-necked sports top with the retina-scorching pink Smile logo on the breast.

He’s trying to make a point. Phillipson, who starts as Smile’s first marketing director on April 17, has already bought into the bank’s culture.

Drawn to Smile’s ethical approach to business, Phillipson feels that his management style will suit the company’s ethos of equality. It should be noted, however, that some employees regard the management style of chief executive, Bob Head, as rather autocratic.

Phillipson talks about joining Internet bank Smile with the excitement of a child. Indeed, at 35 years old he still has a youthful face and a mischievous laugh.

A self-confessed lover of the under-dog he seems well suited to Smile, which has a modest 200,000 customers.

Phillipson was attracted to his first marketing job as head of brand communications at First Direct in 1995 by “the opportunity to build a relatively unknown brand”. He claims to have been responsible for creating the “Little Fella” ads with WCRS, but another source suggests that the true architect of First Direct’s branding was Jan Smith, First Direct’s former marketing director. Thinking that First Direct had become “too much like HSBC”, its parent company, Phillipson decided to leave.

His move from a large financial services company to the Time Group – part of the family-owned Granville Technology Group – was a surprise to some. The transition was indeed hard for Phillipson, who left in January after six months as marketing director.

One source says: “He screwed up when he decided to go to Time. He did a good job at First Direct. It was a very strange move to go from a big company to a family-run business.”

Phillipson admits that the job wasn’t what he thought it would be and says that the family was very keen to keep control of the direction of the company.

He says: “I felt like a consultant rather than a marketing director. I felt that the family was very dominant. The fact that I didn’t stay on says something about my role within Time. Maybe I wasn’t passionate about the company.”

Phillipson’s first task at Time was to overhaul its advertising arrangements. The family wasn’t happy with the Leonard Nimoy ads created by BDH TBWA, so Phillipson replaced the agency with HHCL &amp; Partners within just two weeks.

“The Nimoy ads sent out the wrong message,” says Phillipson. “The computers appeared to be a premium brand.” HHCL went on to create the Dr Apocalypse ads which Phillipson says were well received by Time’s “Sun reader” target market.

But one source within BDH feels that Phillipson could have handled the account switch better. “He came in and knew he had tough targets and he wanted to work with people he knew [HHCL]. I don’t think we’d had any meetings with him by the time he’d made his decision. We said: ‘Hang on, what’s happening here?'”

Phillipson’s falling out of love with Time coincided with what he describes as his “calling” to write. He had already had one novel published, The Paradise Account, which involves an advertising executive who gets caught up in an assassination plot. After securing the backing of his wife and two children, he worked out that they could survive for a year on his savings.

The next month was spent writing – 14 hours a day – a screenplay called The Whole Way. It’s an everyday story of an ad agency account handler who falls in love with his client. Phillipson met his wife when he was an account handler at Lowe Howard-Spink and she was his client, working at CIC Video, but he insists that the screenplay is not autobiographical.

Phillipson’s agent has since advised him to turn the screenplay into a TV script format, so that it can be pitched to production companies.

Just as he readied himself to write a novel, Phillipson noticed that Smile was looking to recruit a marketing director. After 12 interviews, including psychometric tests and an interview conducted by the whole marketing team (everybody’s treated equally, remember), Phillipson’s career break was suddenly cut short.

Following his experience at First Direct, Phillipson sees himself returning to the role of David taking on the might of the Goliath in the guise of high street banks. But, as well as taking on the big companies Phillipson will be battling for customers against his mentor, Peter Simpson, First Direct’s commercial director. Phillipson says: “Peter nurtured me through the early days at First Direct. He can be maddening to work with, but inspiring. Anyone who goes from poacher to gamekeeper needs a hand and Peter helped me through that process.”

He adds that he is prepared to take the fight to First Direct. “I’ve always treated work as a mistress and First Direct is an old mistress,” he says.

He wants to push Smile’s ethical image and has no plans to change the ad agency Farm, as he is happy with its work.

“I don’t like big banks. I think they are greedy and cynical. What I will look to do is build on the relationship Smile has with the Co-Operative Bank (Smile’s owner). I want to develop an inclusive marketing strategy that differentiates Smile from the other banks.”

Phillipson’s first job was as a junior with Saatchi &amp; Saatchi from where he went on to work as an account handler with Lowe Howard-Spink, EURO RSCG Wnek Gosper and J Walter Thompson where he worked on the Barclays business.

However, he claims to have become disillusioned by the advertising industry. One agency, he says, made him present creative ideas to a client that had bombed in test marketing.

He says: “The client said, ‘If you show me the same sort of ideas we’re already running with, I’ll fire the agency.’ They were, so I didn’t show them to him and he walked out.” He won’t say which agency it was. “They’ll know,” he says.

Phillipson faces a challenge in increasing customer numbers when competition is fiercer than ever. Smile is aiming for 500,000 customers by the end of next year, according to analysts Datamonitor. The bank claims that the third most asked question by potential customers is “What is the bank’s ethical policy?” But, as we have seen with recent mortgage and credit card wars, interest rates rule. Whether pushing ethics will be enough to attract customers is another matter.

The screenplay, incidentally, has a happy ending. It remains to be seen whether Phillipson’s love affair with Smile goes the same way.