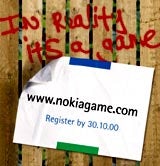 Mobile phone manufacturer Nokia is to launch a multimedia game that will pitch thousands of players across Europe against each other.

Nokia Game will be played across a variety of media – including TV, radio, press, the Internet, voicemail, e-mail and text messages (SMS) – in 18 countries throughout November.

Owners of any mobile phone with an SMS capability will be able to play the game. Players can register for Nokia Game, which is free to play, through the Net from October 7.

Players will have to decipher clues appearing in TV ads, newspaper columns, on radio, the Net and in text messages sent to their phones.

Nokia head of marketing Alison Brolls says the game is a “natural progression” of the company’s brand “philosophy” of connecting people: “It will be a unique gaming experience for the players and is an exciting new avenue for Nokia.”

Nokia is hoping players will set up their own websites based on the game and send text messages and e-mails to help each other solve the various clues.

A pan-European TV, outdoor and press ad campaign, to launch on October 7, will drive visits to the registration website with the strapline “In reality it’s a game”.

Above-the-line advertising has been created by Grey Worldwide and Mediacom TMB handles media buying. The winner from each country will compete for a prize of an all-expenses VIP trip to an MTV Europe snowball event in Italy in January 2001.