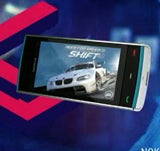 The handset launches on 24 February and is designed to compete with the iPhone. It will be advertised on TV, print, media partnerships and advertorials, digital, social media and PR. Nokia claims it is one of the company’s biggest spends to date.

TV ads will kick off with a 30-second spot on ITV1 in February during Champions League Football and outdoor elements of the campaign will drive home the X6’s positioning as the ultimate entertainment device.

The X6’s music, film and TV playing capabilities, plus gaming and pictures will all be brought to life by a campaign that taps into the ease of mobile entertainment. To maximise impact, the IMAX cinema in London will carry a bespoke execution that showcases each aspect of the X6’s entertainment offer, inviting people to ‘Come Get Entertained’.

Online, there will be a nationwide search to find Nokia’s ‘X6 All Areas’ entertainment reporter. The campaign will encourage the public to submit a 60 second video clip of them showing why they should be selected. Nokia will be supporting the search on 28 university campuses.

Nokia is working with all seven UK operator partners to give customers the chance to win an X6 All Areas pass with every purchase of the handset. Pre-orders are open now.

Fiona Bosman, head of brand at Nokia UK, says: “The X6 embodies youthful entertainment and this will be the entertainment experience of a lifetime for the finalists. They will have to work very hard to impress our judging panel, but it will be worth it as the winner will be assured of a fantastic year.

“This campaign will really engage our audience and Nokia will be creating lots of exclusive and exciting content throughout the campaign that will really bring each aspect of this brilliant device to life, reminding consumers that the X6 is a must have all round entertainer.”

A new creative agency offering evidence-based marketing has been launched by the former heads of Made With Love.

Carlsberg is to launch a £30m World Cup-themed marketing campaign, the beer brand’s biggest single year investment, as it looks to leverage its sponsorship of the England national team.

Lynx, the men’s deodorant brand, is launching a new mobile campaign called “Get In There” aimed at making girls look, laugh and respond.