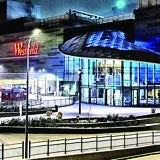 The Westfield Stratford City shopping centre is the gateway to the London Olympic Park and more than 70% of Olympic visitors are expected to access the Games via the mall.

Mark Zimmer, head of Olympic brand alliance, says: “It’s the first time this opportunity has been available this close to the park at an Olympic Games. It’s the closest you can be without infringing on LOCOG and it’s a real opportunity for companies not able to sponsor.”

All retailers and brands present in the shopping mall have signed “anti-ambush marketing” contracts, which will be policed by LOCOG, but unlike in the Beijing Olympics non-sponsors are not required to cover their external signage.

This means ad space and experiential areas inside the Westfield centre are available to non-sponsors which can buy a heavily branded presence within the mall during the Games.

Westfield is also installing temporary corporate hospitality areas on the rooftops and surrounding areas that are available to sponsors, non-sponsors and broadcasters.

Zimmer adds: “We could take the most contentious [non-sponsor] brands to advertise in our malls but we want to be good neighbours to LOCOG and hope that it will be members of the Olympic family that take the space.”

“We could have the Pepsi challenge going on inside the mall if we wanted to but we don’t want to become ambush central.”

The mall, which will be the biggest shopping centre in Europe, is due to open in September, ahead of the Games.