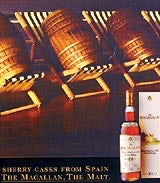 Most of us like a tipple, but British businessman Norman Shelley is such a fan of Macallan Whisky that he’s bought his way into the brand’s hall of fame.

The Turkey-based drinks distributor was so taken with a visit to Macallan’s Scottish distillery that he decided, in true Victor Kiam-style, to buy most of it.

Well, a slight exaggeration. But he did splash out on 76 bottles of vintage malt, admitting he would be taking some of his goodies home to “celebrate”, after his inauguration into the Macallan hall of fame.

Staggering? Yes, you probably will be, Norman.