The nationalised bank will remain the Championship club’s shirt sponsor until the end of the 2013/14 season after signing a four-your extension believed to be worth up to £10m.

The firm’s sponsorship of the club, which began in 2004, attracted criticism from taxpayers after the bank was nationalised in 2008.

Northern Rock defended the new deal, arguing that “brand awareness and promotion are important elements in the continuing development of the company”.

Gary Hoffman, chief executive of the bank, says: “We remain mindful of our responsibilities under Government ownership and only consider those advertising and promotion channels that deliver a high return on investment and good strategic fit.”

The bank says the value of the deal will be worth between £1.5m and £10m, with the latter amount paid only if Newcastle is promoted to and plays in the Premier League for the whole of the four-year contract, which starts from the 2010/11 season.

The club was relegated from the Premier League last season but is currently top of the Championship.

Its home ground has been renamed sportsdirect.com@St James’ Park Stadium until the end of the season or until a new sponsor can be found in a bid to boost commercial revenues. 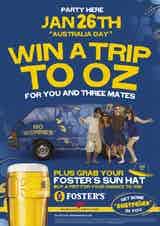 Foster’s is launching an Australia Day game card promotion in pubs and clubs.

The understandable aim of cutting costs is not just having an adverse effect on media agencies, but on clients themselves