Tropicana has come a long way since it was first established in 1947 as a Florida-based company selling fruit gift boxes. Now under the ownership of PepsiCo, Tropicana Pure Premium has become the biggest selling fruit juice in the UK, where it launched in 1991.

Tropicana has been successful at extending the line with premium variants, particularly since PepsiCo acquired the business in 1998. It now has a juice brand for children called Tropicana Go! and this year it launched Tropicana Smoothies.

However, another major 2008 product launch, Tropicana Spirit, was less successful, and the carbonated juice brand was scrapped less than nine months after it was introduced (MW last week).

Its failure came within days of PepsiCo’s admission that its other smoothie brand, PJ Smoothies, was not performing strongly enough and would also be axed. Its big hope in this market will be smoothies under the flagship Tropicana brand, which is receiving heavy investment, including a 5m marketing budget.

The decision to cut PJ Smoothies from its portfolio and focus on Tropicana Smoothies is part of PepsiCo’s strategy to exploit the heritage of the Tropicana brand name.

Interbrand chief marketing officer Graham Hales says Tropicana has successfully evolved over the years. “I don’t think it has made many mistakes along the way. Juice is a sector where own-label has got pretty good credentials so it would be easy for a brand like Tropicana to come under pressure. But in terms of its innovations it is bang on brand and it is still distinctive in an area that is heavily commoditised.”

A TNS spokesman says that over the past ten to 15 years the pure juice category has traditionally been dominated by private labels, but with the entrance of big brands, consumers started trading up from own-label because the premium offerings tasted better and were better quality. “This trend had a big impact on the market, driving growth of pure juice and soft drinks in general for a few years,” he says.

In 2005, Coca-Cola relaunched its Minute Maid juice brand backed by a 5m ad campaign, but despite major investment it has yet to make a serious dent on Tropicana’s sales – and not for the first time. Initially, Minute Maid was distributed exclusively by McDonald’s in the UK, but in 1998 Coca-Cola launched it in the retail trade. However, it was withdrawn after a year following poor sales.

The TNS spokesman adds that while the smoothies category is widely treated in isolation, it is also grouped with pure juices because both use fresh ingredients. The growth of the smoothie market, despite the slowdown it is suffering this year, has been a further driving force behind the trend towards premiumisation.

But while PepsiCo may be getting much of its Tropicana branding right, it has failed to restore PJ Smoothies, the original leader in the smoothie market, to its former glory.

David Haseler, planning director at Smith & Milton, the branding agency which helped launch PJ Smoothies in the UK, is less glowing about PepsiCo’s ability to brand.

“PepsiCo didn’t understand what it was buying. What is evident is it didn’t recognise the value of the brand itself, and clearly a very important part of the Pete & Johnny brand [the smoothie’s brand name before it was rebranded as PJ] was its personality,” he says.

“PepsiCo assumed it could develop the business in the way it usually does. For PepsiCo, it’s not about developing the brand personality, but much more about trading and distribution.”

PJ Smoothies was known as Pete & Johnny when it launched in 1994, led by founders Harry Cragoe and Patrick Folkes. PJ claimed it was still the number one smoothie brand by volume when PepsiCo bought it 11 years later. But its performance has since dived – outplayed by Innocent.

PepsiCo tried to revive the brand’s fortunes with a series of makeovers but investment has plummeted in recent years. It is reported to have spent about 20m in 2005 on the rebranding to PJ. By 2006 spend dropped to about 1m on advertising, and just 100,000 the following year, according to figures from AC Nielsen.

With the launch of Tropicana Smoothies earlier this year, PepsiCo sidelined the PJ brand as its “value” offering, slashing its price 30% to 99p and cutting the variants to just four in a bid to compete with own-label.

Haseler says there is no doubt that with Tropicana Smoothies it will get the sales and distribution by exploiting the brand name. “But there is no character in Tropicana. It’s a premium product: the big question is can it make a smoothie an affordable everyday drink?” he says.

Meanwhile, Innocent, the uncontested king of the smoothie sector with a 68% share (IRI data), has launched its first fruit juice product. Innocent Orange Juice, which is made both from freshly squeezed and not-from-concentrate juice and is available with or without bits, launched in August. Innocent expects the brand to achieve 10m in sales in its first year.

It will play in a sector that has slowed somewhat from last year, but it is still worth more than 1bn in sales. According to figures from TNS Worldpanel, in the 52 weeks to October 5, fruit juice sales reached 1.09bn, up 3.7% (1.05bn) a year earlier.

Yet the Tropicana masterbrand rolls on steadily. The Checkout Nielsen Top 100 Brands reports that Tropicana sales grew by 10.1% to 245.9m last year. Only Coca-Cola, Lucozade and Robinsons are bigger soft drinks brands and, in the chilled juices category, the brand is three times the size of its nearest rival.

Tropicana marketing director Jenni Dill has also said this year that new product development remains on the agenda, and there are plans to double the value of its chilled business in the next three years. 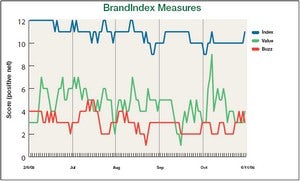