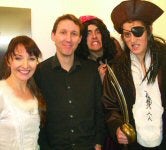 Some cynics claim the ad industry is full of pirates and brigands, but workers aboard the good ship planning and buying had their timbers shivered last week when a crew of buccaneers raided agencies across London.

The pirate hoard was press-ganged into service by Pearl & Dean and Carlton Screen Advertising, and ordered to remind agencies of the summer release of the third Pirate of the Caribbean film, At World’s End.

The Diary can picture the pirates raiding the offices of Zenith, smashing their way through the windows with a blood-curdling rendition of the Pearl & Dean theme tune.

However, the photo portrays a rather less violent picture of the proceedings, and shows Bruce McGowan, head of Cinema at Zenith, invoking the right of parlay with the pirate representatives of the Cinema Advertising Associtation.

The value of a good marketing database is incalculable, but organisations must think hard about who should pay for it, and about whether to outsource or keep operations in house. By David Reed.

Thanks to the Net, disgruntled consumers have many forums on which to vent their spleens about unsatisfactory products. However, these also provide opportunities for researchers. By Alicia Clegg.

As London gears up to host the 2012 Olympics, potential sponsors are lining up for a chance to be associated with the biggest sporting event in the world. But, as well as the small matter of the £80m price tag, companies will also have to prove their “green” credentials before they are even considered as […]