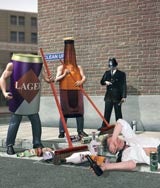 The alcohol industry claims that it advertises responsibly, bound by codes of practice, and that it is not to blame if people choose to abuse its products. The health lobby, however, buoyed by its success in banning tobacco ads, looks likely to pick drink as its next target.

The alcohol industry, often accused of encouraging binge drinking and using inappropriate sexual and sporting imagery in its advertising campaigns, is taking steps to clean up its act as it tries to fend off legislation aimed at curbing its marketing activities.

Many in the industry fear that it could be next in line – after tobacco – to face an advertising ban. These fears have already prompted two major players to take radical steps towards promoting “responsible drinking”.

Diageo, which produces Guinness, Gordon’s Gin and Johnnie Walker, claims it will be the first drinks company to set up a social responsibility unit to ensure that its UK marketing adheres to internal and external ethical guidelines (MW last week), although rivals say that they have been promoting the sensible-drinking message for several years. Diageo is also considering adding a “responsible drinking” message to some or all of its UK marketing communications.

In a separate move, the two Glasgow football clubs, Rangers and Celtic, are to take the step of selling alternative versions of replica kits for children, with the name and logo of the teams’ main sponsor, Carling, removed (MW last week). The initiative follows changes in the code of practice of the alcohol industry’s self-regulatory body, the Portman Group. The code covers the naming, packaging and promotion of alcoholic drinks. It now specifies that alcohol brand names should not be carried on merchandise aimed at children. Replica kits are excepted – provided that an alternative kit, without the sponsor’s name, is also made available.

The moves come in the middle of Government consultation, conducted by the Prime Minister’s Strategy Unit and the Department of Health, to produce a national alcohol harmreduction strategy for England. The document is expected to explore the impact of alcohol advertising and the “objectives” of the advertisers who market these products.

It is likely that the Government will want manufacturers to label their bottles with detailed health warnings, just as the tobacco industry has been forced to under European Union and UK legislation.

‘Please don’t buy too much of our product’

Although the drinks industry claims that it is working closely with the Government to tackle the problems associated with alcohol misuse, it would not welcome the statutory introduction of any health warnings.

It fears that publication of the strategy document, due this summer, could trigger fresh demands for tighter restrictions on alcohol sales and advertising, and that this could eventually lead to an all-out ban on advertising, similar to that suffered by the tobacco industry.

A Scottish Courage spokesman says: “Lobby groups believe that they have won the war against tobacco, and inevitably the alcohol manufacturers are next in the firing line. The industry needs to behave responsibly. Our business is to sell alcohol, but if we do not market it in accordance with the existing codes of conduct, we shall be putting our own future in doubt.”

A marketer from a rival company adds that, by trying to monitor itself more effectively, the alcohol industry is hoping to send out the right signals to the Government and lobby groups: “The health lobby is convinced that, whatever regulations might exist, the alcohol market is not interested in promoting sensible drinking. There certainly are threats to advertisers, with the EU having signalled a crackdown on alcohol advertising. Eventually, it could go the way of tobacco advertising.”

In February this year, tobacco advertising on billboards and in newspapers and magazines was finally banned in the UK. The Tobacco Advertising and Promotion Act became law in December, extending the ban on TV advertising to text-based ads. Tobacco sponsorship of sport is also being phased out.

Carole Brigaudeau, communications and project manager of the Amsterdam Group, a European trade body for alcohol producers, admits that the European Commission is in talks with the industry about legislation to tackle under-age drinking and drink-driving. But she says: “Unlike tobacco, alcohol advertising is likely to remain self-regulated in the future.” 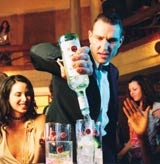 Allied Domecq director for group social and environmental policy Jan Buckingham maintains there are significant differences between the alcohol and tobacco industries. She says: “The alcohol industry has never pretended that over-use or misuse of the product cannot have dangerous consequences. This was not the case with tobacco manufacturers. Also, there is plenty of scientific research showing that drink in moderation is good for an individual’s health. I do not think that alcohol will ever have to face a blanket ban on its advertising and marketing.”

The EU has yet to introduce any restrictions on alcohol marketing, but countries such as Denmark and Finland have strict regulations banning virtually all advertising outside trade magazines, and Sweden is asking for a European embargo on all alcohol marketing. France has already banned TV ads for alcohol and the Republic of Ireland, Holland, Germany, Greece and Spain are all considering restrictions.

WHO says we’ve had enough

Pressure to introduce restrictions is likely to continue, from lobby groups as well as heavyweight organisations such as the World Health Organisation (WHO), which has attacked alcohol marketing as “aggressive and ubiquitous” and has claimed that the excessive consumption of alcohol is one of the main causes of ill health.

In the UK, the drinks industry is subject to several sets of advertising regulations designed to prevent the targeting of teenagers and the use of sport and sexual imagery in advertising. The Independent Television Commission, a statutory body, regulates TV ads; the Radio Authority polices radio ads; and non-broadcast advertising is subject to a voluntary code of conduct, drawn up by the Advertising Standards Authority (ASA).

In addition, the Portman Group, founded in 1989 by the alcohol industry, has drawn up its own marketing code which aims to promote responsible attitudes towards alcohol consumption and prevent under-age drinking.

Cranking up the codes

Last month, the Portman Group tightened its marketing code in response to concerns that ready-to-drink (RTD) products are encouraging teenagers to develop a taste for alcohol and that the marketing of such drinks increases their appeal to that group. Portman Group director of corporate communications Jim Minton says: “This demonstrates the effectiveness of the existing code of conduct. We have the flexibility to make rapid changes in response to public concern. Any legislative measure would be unnecessary.”

The ITC also maintains that its existing restrictions on alcohol advertising work well. Last year, it upheld complaints against only one alcohol ad, Carling’s “licking the flat clean” execution, which attracted 69 complaints for having an inappropriate sexual theme. An ITC spokeswoman says: “The situation was exacerbated by the fact that the ad was transmitted during the World Cup, when children could be watching. The transmission of the ad was then restricted to after the watershed.”

On the basis of its own monitoring research, the ASA estimates that 98 per cent of alcohol ads comply with its advertising code of practice. But it has been quick to amend its code when problems have arisen. After lobby groups complained that Budweiser’s “frogs” ads were attractive to teenagers and children, the ASA introduced a new rule stating that “treatments that are likely to appeal to minors should not be used” when advertising alcohol.

One industry insider admits, however, that several loopholes exist for alcohol advertisers. For instance, both the ASA and ITC codes of practice preclude linking alcohol with sporting achievement. But the drinks industry is free to sponsor as many sporting events and teams as it likes, Carling’s three-year deal with Rangers and Celtic being an example. According to some, these conflicting messages from alcohol brands give ammunition to the industry’s critics.

And Hugh Burkitt, chief executive of the Marketing Society and a member of the Portman Group’s complaints panel, says that alcohol marketers tend to push their luck. He comments: “Many alcohol ads are in danger of straying too far from the rule book. They tend to go against the spirit of the rules laid down by the Portman Group, which is why I think alcohol advertising will come under a great deal of pressure in the near future.”

Heard this one before?

But Heineken marketing director Leslie Meredit argues that drinks brands do not deliberately flout the self-regulatory precepts of “truth and decency” when advertising their brands. She says the purpose of advertising is not to encourage excessive drinking, but to reinforce brands and steal market share: “As a marketer, I know that no advertising is so powerful as to convince people to do something they have never done before. Advertising can only make the brand relevant for consumers.”

Critics, however, point out that this argument is the same as that which was often used by the tobacco industry, and that it eventually carried little weight with the regulators.

Although it may not be the sole factor driving the increase in alcohol consumption, and thus leading to ill health, advertising by its very visibility becomes an obvious target for health campaigners.

And while self-regulation remains the preferred option for alcohol advertisers, the worry for the industry must be that the Government and the EU have acquired a taste for the regulation of marketing and advertising after their battle with the tobacco industry. Alcohol could find itself next on the menu.