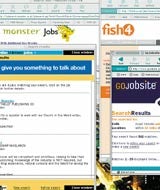 Online recruitment is finding favour among both employers and jobseekers, and site providers are introducing new features to consolidate their growth

It is a widely accepted fact that the dot-com bubble which saw such impressive growth in the online market in the period to 2000 has well and truly burst. Since then, numerous internet and technology companies have been struggling to maintain their position, with many shedding jobs, severely cutting back or even going into liquidation.

However, new research from market intelligence company Key Note suggests that the online recruitment sector is bucking this trend and has gone from strength to strength. The report shows a clear trend towards online recruitment for recruiters and candidates alike.

According to Key Note, online recruitment – in contrast to many other internet sectors – supports a number of profitable sites and is now recognised as a strategically important medium by recruitment agencies and, more recently, by employers. Companies have been seeking to use e-recruitment as part of a wider shift of their human resources operations to an electronic format.

Key Note estimates that, in 2002, recruitment sites in the UK advertised a total of 1.3 million jobs (some are advertised on more than one site) and had an estimated total of about 6.2 million unique users. And the number of users is still increasing. In February 2003, there were an estimated 7.5 million job site users in the UK.

While job sites are offering a broader range of jobs and becoming more sophisticated in their geographic targeting, they are not expected to replace the traditional recruitment agency, serving rather to complement offline activities. The growth of online job advertising has attracted many traditional offline players into the market. Publishing groups, in particular, have been attracted by the rise of online classified advertisements, given that classified advertising makes up a significant share of traditional print media revenues.

Seeking a job is obviously the prime motivation for using a recruitment website, but a range of other factors also drive site traffic, including the availability of job-related information – details of employers, recruitment agencies and industry sectors. People also visit sites in order to check salaries, find careers advice and read employment news.

Online recruitment has also changed expectations of jobseekers: traditionally, job applicants were willing to wait a few weeks for news of their application, but today many expect a reply within hours or days.

Job sites are also extending their services, offering more sophisticated, tailored solutions to clients. One key indication of how online recruitment is maturing is the growing proportion of companies that have a human resources employee to deal specifically with internet recruitment.

But despite the obvious advantages of the Web over traditional channels, online recruitment has some severe limitations, especially where creative roles such as designers, architects and broadcast jobs are involved. For jobs such as these, applicants generally have to send in samples of their work, something which can cause problems when done electronically. The advance of online digital technology, however, will no doubt make uploading the large files involved easier.

Limitations such as this – and the fact that not everyone has access to the internet – means that organisations with an equal opportunities agenda still need to use a variety of media when recruiting. Offline recruitment is still needed to reach almost 40 per cent of adults in the UK and the internet is unlikely to reach 100 per cent of jobseekers in the near future.

In the next five years, Key Note expects online recruitment to continue to grow in popularity among both employers and employees. It is predicted that, in five years’ time, 10.3 million adults will be using job sites and that all major companies will be using the internet to advertise vacancies.

Recruitment websites are also expected to grow in sophistication and the investment required for this will no doubt force greater consolidation.

By 2007, Key Note expects the number of dedicated recruitment sites to have halved. Most major employers will advertise jobs via their own websites (plus the surviving job sites), but will buy in expertise from the recruitment companies. Job sites will cease to be purely providers of an advertising medium but will become consultants, technology suppliers and solution providers.

As working patterns evolve, people are becoming reconciled to the likelihood of changing careers several times during their working lives and, consequently, are more likely to actively seek assistance from job sites on career matters. Flexible working patterns, involving more temporary contracts, sub-contracting and self-employment, are all growth employment categories, and those sites which include career management services, as well as offering a good range of high-quality vacancies, are likely to prosper.