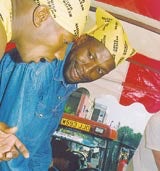 Initially, organisers called for headline sponsorship of &£1m for the 2002 event (MW March 14, 2002), but in the event no commercial sponsorship materialised.

Last year the NHCT was torn apart by factional in-fighting, which culminated in the dismissal of long-serving chief executive officer Claire Holder in May. A restructured NHCT board, led by chairman Professor Chris Mullard who was appointed last July, has briefed music and fashion specialist agency U Influence to source sponsors. The agency replaces Harwood.

The &£300,000 title sponsorship package includes the rights to have images and logos printed on all official merchandise and materials, including Carnival bulletins, press releases, guides and the website.

The sponsor’s logo would also be allowed to appear on uniforms and official dress worn by all official staff. NHCT says the sponsor could brand billboards, posters and banners at locations including all entry and exit points, on street lamps and the main performance stage.

The company could also distribute, sample and sell its products at all carnival events and, if a drinks brand is secured as headline sponsor, it would be able to have exclusive use of up to five franchise bars in the carnival area.

Tobacco firm Gallaher is to repackage its cigarette brands Camel Lights and Camel Ultra Lights as Camel Smooth and Camel Refined, to circumvent the European ban on misleading taste descriptions such as “light” and “mild”. At the same time, its two variants of Silk Cut will be called Blue and Silver, rather than Extra Mild […]

Campbell Grocery Products is shaking up its marketing department, and axing a number of staff to make way for a raft of new arrivals. The exodus began soon after ex-Clairol marketer Tim Perman arrived at the company last year (MW August 22, 2002). Marketers who have left or are leaving include Homepride marketing controller Jon […]

Partners BDDH has created its first TV campaign for bmi. The ads break on April 1 and use the strapline ‘Those who know fly bmi’.