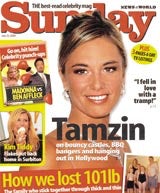 The News of The World is to revamp its magazine, called Sunday, in September.

The move follows a decline in circulation at the newspaper, which is part of News International’s News Group Newspapers division. Insiders say a refreshing of the paper’s content is seen as vital if sales are to increase.

Sunday magazine’s sizeable television listings section will be hived off into a new section and the main magazine will be printed on higher-quality paper. One insider says it is not clear whether the magazine will change its name. A possible title being touted is The Biz.

A spokeswoman for the News Of The World says: “We have no plans to relaunch or revamp at the moment.”

Competitor the Sunday Mirror, owned by Mirror Group Newspapers, is losing circulation at a greater rate. Average net circulation fell by 3.03 per cent, year on year, for the six months from January to June.