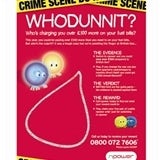 Energy company npower is to repeat a series of press ads after British Gas failed in its bid to get the Advertising Standards Authority (ASA) to uphold a complaint about the executions’ content.

It is understood that British Gas complained to the ASA about national press ads, which first ran last month. The ads carried the strapline “Whodunnit?” and featured yellow tape with “crime scene do not cross” and a blue chalk outline of a tear drop, similar to the BG flame characters. The text read: “Who’s charging you over &£100 more on your fuel bills?â¦ It was a tough case but we’re pointing the finger at British Gas.”

Centrica-owned BG complained that the ads were denigrating the company’s name as they suggested that BG’s pricing policy was “criminal”. However, the ASA decided against investigating the complaint further.

The move to rerun the press ads is the latest battle in a war of words between the energy providers, which has seen npower and BG, along with sister company Scottish Gas, run ads criticising pricing policy or complain directly to the ASA about the content of rivals’ advertising.

In another spat over ads, Scottish Gas and BG were ruled to have misleadingly claimed their price rises were “balanced out” by similar increases from rivals.

TV ads for the Centrica businesses featured customers who were said to be unconcerned by rising bills, as other suppliers would be just as expensive. But the ASA ruled people would likely save money by switching.

Late last year npower called for a ban on all BG advertising unless the supplier agreed to have all ads vetted before they appeared. The call came as the ASA upheld four complaints against BG’s frozen prices execution.