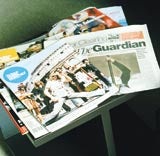 The National Readership Survey is examining whether to split out its newspaper and magazine polling in response to mounting pressure from agencies and media owners.

The NRS provides data on newspaper and magazine reading habits including information on age, gender and demographic background.

However, its interviews with each of its 36,000-strong panel have a 30-minute maximum time length and critics feel that questions about too many publications are crammed into this period.

The NRS says it is looking at a new strategy but that the structure will not be split up. A spokesman says: “Everyone wants to keep the current structure – but there is a great deal of interest in conducting separate surveys for magazines and newspapers under the NRS umbrella.”

Options include doubling the length of interviews, which could prove too demanding for the panelists, or splitting the sample into two groups of 18,000. However, critics say this would create too small a sample.

One media buyer says that “the requirements and questions are somewhat different between papers and magazines,” while another says that agencies tended to “rubbish” NRS figures and the large readership swings they often produced for a title.