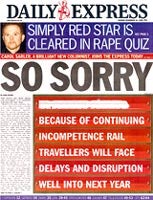 Ellice has responsibility for marketing and circulation at Northern &amp; Shell which bought the titles for &£125m from United News &amp; Media last Wednesday.

Express Newspapers commercial director Paul Woolfenden oversaw marketing at the titles prior to the takeover by N&S.

Joint managing director for N&S Stan Myerson is to oversee advertising sales on the titles.

There is still no decision on the future of four unprofitable websites that N&S acquired as part of Express Newspapers – Sport Line, Company Leader, Express.co.uk and All About Parenting. Up to 40 staff working on the sites could be made redundant.

It is understood that Northern &amp; Shell is facing a projected annual loss of &£8m from the four sites.

Richard Desmond, chairman of Northern &amp; Shell has said that he intends to increase the circulation of The Express to more than 2 million to rival the current mid-market leader the Daily Mail.

This week’s Express is carrying vouchers for a discount on sister magazine OK! while The Daily Mail is offering readers a free copy of Hello!