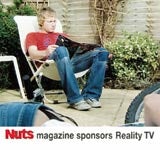 The six-month sponsorship deal will see the lads’ mag sponsor key Reality TV programmes during the week, as well as its Saturday evening schedule.

Reality TV, a themed digital channel that launched three years ago in the UK, tells the stories of real people caught in dramatic situations.

The sponsorship will cover popular Reality TV shows including Moronic 21st Century Idiots, Cage Combat and Ouch That Had To Hurt.

Zone Vision’s Reality TV channel launched in Europe in late 1999. It is broadcast in 18 languages and is available to more than 134 million subscribers. In the UK, the channel reached almost 4.5 million viewers in May and has a strong youth profile (BARB UK/TNS Infosys).

Nuts senior marketing manager Clair Porteous says: “Nuts is the most successful magazine for young men in a generation. The deal allows us to make an even closer connection with our readers.”