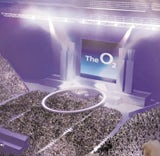 Temporary alternatives are currently being considered for the venue, which was renamed in 2007 after a naming rights deal between 02 and the venue’s owner AEG.

The move is a result of IOC’s “clean venues” policy which aims to protect the rights of official partners.

The policy aims to safeguard the image of the Games by limiting the number of advertisements and branding inside Olympic venues.

British Telecom, the Games’ official telecoms partner, is understood to have paid about £80m for its tier one status.

Separately, Ansco Arena, the AEG subsidiary that runs the arena says pre-tax profit was £15.6m in 2008 against revenues of £53m in its first full-year of trading.

Kristine Kirby, ecommerce director at fashion retailer Lipsy, has stepped down from her role.

Web-based home and motor insurance provider Zurich Connect UK has signed a deal to use Experian Elements, the marketing software, data and analytics package. As part of the service, Experian will provide a single customer and prospect view, populated by in-house data and enhanced by Experian’s own files. The service will be used to drive […]