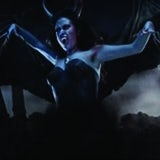 The mobile network operator’s TV ad showed a faun standing beneath a tree saying he is in “O2’s mind”. A woman called Mel appears and the faun says that the mobile operator thought “What if Mel was out shopping one day and she spots an offer for new customers that’s better for the deal she’s on?”

The woman then becomes angry and turns into a demon-like creature with wings and horns before being pacified by O2’s pledge to existing customers and changing back.

The ad was shown throughout the day and eight viewers complained that it could scare children and was inappropriately scheduled.

O2 says it was never its intention to cause distress to children and it had followed compliance expert Clearcast’s advice. Clearcast said that the wicked fairy creature with talons and fangs was the kind of character who might appear in a fairy tale, children’s Disney film or pantomime and children were familiar with that type of character.

The Advertising Standards Authority (ASA) said that the transformation scene was in the context of a fantastical scenario and, while dramatic, was “not overtly frightening or sinister”. It did not think that the ad’s content or scheduling would cause distress to young children.

It also dismissed complaints that the ad was misleading because it implied that O2 offered the best deals to existing customers, whereas only those at the end of their contract were eligible for best deals.

The ASA said that that viewers were familiar with mobile phone contracts commitments and the line “we’ll make sure our existing customers always get our very best deals when they stay with us” made it clear the ad was targeting customers coming to the end of their contract.