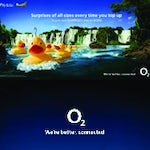 Zenith’s footprint and capacity, with local teams in each of these countries, as well as the quality of its service were decisive in the final assessment.

With this tender, Telefónica’s Global Marketing division has aligned its European media agency policy regionally, as it did recently in Spain and Latin America.

Sally Cowdry, marketing director, O2, says: “Over the last six years we have been very pleased with the quality, creativity and value of Zenith’s media planning and buying for O2 UK. We are delighted that Zenith has been awarded the European media business.”