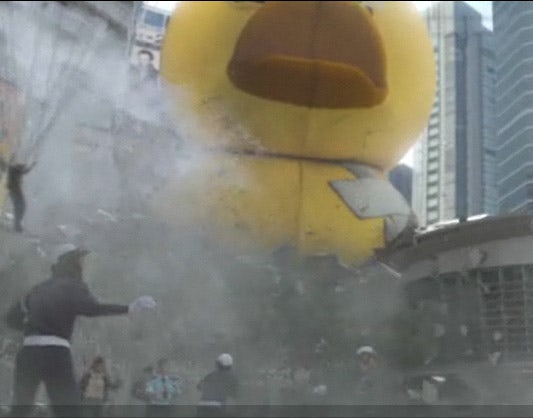 †Coca-Cola is launching a new campaign for its juice brand Oasis that will feature a giant, water-hating rubber duck.

It is the first time Oasis has returned to screens following the controversy surrounding its “Cactus Kid” ads which the Advertising Standards Authority banned for condoning underage sex and teenage pregnancy†in October last year.

The new ad forms part of the “For people who don’t like water” series, “RubberDuckZilla” takes its cue from classic movies such as Godzilla and King Kong, with the giant duck shown storming through a Japanese city destroying everything related to water in his battle to promote variety and the freedom to choose tastier drinks.

The campaign, created by Mother, will air during Hollyoaks on May 18 and is aimed at 20-something consumers. It will be supported by outdoor and print advertising.

There will also be a digital element created by Poke. A dedicated website will host an array of interactive experiences, including new video games.

The Advertising Standards Authority has ruled an email promoting a film called Shifty – a British thriller about a young muslim crack cocaine dealer – was “distressing and irresponsible”. Visitors to the website promoting the film, which was written and directed by Fran Creevy, were given the option to “stitch up a mate” by entering […]

Charity direct mail solicited almost five times as many complaints from the public as so-called “chugging”, according to independent body the Fundraising Standards Board (FRSB). Almost three quarters (74%) of the 26,349 complaints received by charities registered with the FRSB were about direct mail sent through the post, whereas face to face fundraising solicited just […]

The Darwinian theory has been the recent focus of debate and the media but it does not just apply to species, but agencies too