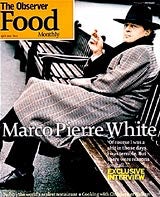 The Observer claims that the launch of Observer Food Monthly (OFM) on April 22 boosted the newspaper’s sales that day by five per cent. The OFM figure is based on the print total minus returns.

The Observer hopes the monthly supplement, which casts an expert eye over the culture of food and drink, will repeat the success of Observer Sport Monthly (OSM) which hit the streets a year ago.

Since then ABC figures have shown the paper has increased weekly sales by an average of 32,532 copies.

For the six months to January 2001, the Observer’s average circulation was 443,232, an increase of 8.7 per cent on the same period last year.

The move continues the Observer’s strategy of driving circulation growth through “editorial excellence” while placing less emphasis on short-term promotions.

A spokeswoman for the Observer says: “These supplements entice potential customers who don’t usually buy the Observer to sample the content of the newspaper.

“What we found with OSM is that many customers stayed with the newspaper because they like the overall product.”

There are no plans to add to the OSM and OFM stable in the near future. However, the spokeswoman adds: “It’s something we are always looking at.”