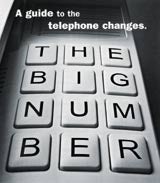 Communications regulator Ofcom is planning to draw up a shortlist of advertising agencies to pitch for its multi-million-pound campaign to promote a new telephone number change in Greater London.

Starting from summer next year, new telephone users in London will get a 0203 prefix to run alongside the existing 0207 and 0208 numbers.

A spokesman for the independent regulator confirms that a public information and awareness campaign will be launched in early autumn and adds: “We will want to communicate with our customers about the changes as early as possible.” The details about budget allocation for the campaign are also being worked out.

The 0207 and 0208 codes for London were introduced during the “Big Number Change” of 2000. At the time, J Walter Thompson created a &£20m television campaign to inform consumers of the new national telephone code and number changes.

Ofcom took over the responsibilities of five former regulators last year to replace the Broadcasting Standards Commission, the Independent Television Commission, Oftel, the Radio Authority and the Radiocommunications Agency.