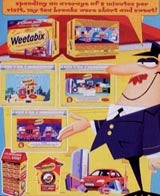 If you go down to the shops today, you’re sure of a big surprise. It could be some Harry Potter merchandise or perhaps a best-selling novel. There is even a chance that you could win a house.

Many packaged goods categories are locked into such intense competition for market share and shelf space that promotional activity has become almost continuous. Certainly for large swathes of the consumer population, the decision about which brand to buy can be influenced by the premium offered on a product’s pack.

One couple getting married last year took this behaviour to an extreme degree. Heinz was running its free house instant win promotion, so the pair asked all guests at the wedding for tins of beans instead of conventional presents.

But if beans means houses, what happens to the brand when it is not under promotion? And just how critical is it to get the right offer and premium – delivered at the right time – so a packaged goods brand is able to thrive?

“If you take cereals targeted at children as an example, there is an element that gets back-to-back promotion. Most manufacturers in that sector are driven by the fact that people won’t buy without a premium,” says Institute of Sales Promotion (ISP) director-general Edwin Mutton.

The levels of competition make this a fiercely contested market. Most packaged goods products, and especially cereals, are commoditised. And the differences between branded and own-label are being eroded as retailers fit products to each level of the market.

“With everyday low pricing, if you can’t stand out on the shelf on price – and this applies especially to cereals – then you need to be able to do so through the pack,” says Mutton. Little surprise then that manufacturers have gone for loud promotions, such as the Weetabix “House” promotion that won last year’s ISP Grand Prix.

This gives brands just three seconds to grab their largest potential market. Blue Chip Marketing International associate director Robert White says: “As a results of this, the cereal aisle is one of the most promotionally active in the world of packaged goods marketing.”

But these family units are not all leaving their decisions to that tiny window of time when they pass the fixture. Many are brand loyal, while some are switchers. The latter group are the ones who choose brands according to the promotion on offer.

“This happens across retailers. For instance, Boots has trained their consumers to seek out three-for-two promotions. This effectively means a certain group of consumers wait until this offer appears and then stock up on the products,” says White.

Bringing purchases forward or creating stock-up buying is no good for cereal manufacturers, because retailers may restrict their shelf space during non-promotional periods. So they have to find combinations of activity that maintain consumption by brand loyals and attract switchers.

“Essentially there are only two forms of promotional offer – win and free. However, there are a number of variations within these that brands such as Kellogg draw upon to complement their wide portfolio of products,” says White.

As well as addressing several types of buying behaviour within a single promotion, manufacturers also have to take demographic differences into consideration. Children demand instant gratification, which is why many cereal promotions offer in-pack premiums.

But while it is easy to assume brands aimed at children will use instant wins to trigger pester power, this is not necessarily the case. “Although many believe the objective is pester power, it isn’t. That is seen as a measure of failure, not success” says Dave Lawrence, planning director of Logistix Kids, which researches, designs, produces and licences premiums for many packaged goods brands.

Children are certainly highly influenced by promotions, but parents have other goals. “Breakfast is seen as an important meal. There is a big concern for a parent to ensure their children leave the house with a good breakfast inside them,” says Lawrence.

This means parents get upset if promotions trigger demand for a product that is not ultimately consumed. Given that the average box of cereal lasts for ten days, the product has to be able to sustain a child’s interest. “Parents take issue with premiums used on products that don’t have an affinity with children,” he says.

It is important to take this sensitivity into account, given that 73 per cent of parents buy what their children want from the cereal aisle, according to research carried out by Logistix Kids. This is one of the few food categories where children are bought their own product, while parents buy something different for themselves.

Despite these concerns, manufacturers generally get their promotional choices right. Only one-in-five UK parents disapprove of the use of toy premiums and character licensing, compared with two-thirds who disapprove of heavy toy advertising at Christmas, for example.

At the opposite end of the spectrum, it is easy to assume that older adults are resistant to promotional activity. “With every group of older people, when you ask if they are influenced by marketing, they all claim not to be. But if you test two pieces for the same product, one with a premium and the other without, the premium version pulls,” says Millennium executive creative director Kevin Lavery.

His agency carried out the direct mail and online campaigns promoting All-Bran to women over 55 last year. The results showed that this age group is as willing to go online, fill out surveys, collect coupons and redeem them for an incentive as anyone else.

The same effect can be seen in the highly commoditised insurance market. “We do television work for Axa Sun Life’s 50 to 80 Plan. They offer incentives such as a kettle, alarm clock or carriage clock, which have almost become part of the brand,” says Lavery.

Testing alternatives has failed to discover anything with the same power to generate consumer response. The lure of something for nothing remains constant throughout a consumer’s life.

For some manufacturers, this merging of promotion and brand can be taken further. “Some cereals say ‘let’s make the promotion part of the product’, such as Power Rangers and Golden Grahams,” says Meerkat Marketing Communications partner Graham Green.

Unlike buying an insurance policy, the decision to buy one brand does not eliminate the possibility of buying an alternative as well. “Consumers have a portfolio of cereals from which they buy. They make a decision to buy based on a number of things, of which the promotion is one. What’s happened is that the free gift in-pack is seen as added value,” says Green.

And they have moved many promotions towards added value and away from price-cutting. Green says: “Promotions can suffer from using extra fill. Over promotion can even lead to the death of a brand, such as in the case of Hofmeister.”

The beer brand ran a 13.5 per cent extra fill promotion which worked very well and gained it additional retail listings. “But they couldn’t afford to support the brand equity and Hofmeister disappeared because it undermined brand values by overcooking the promotion,” Green says.

There are growing signs that the commoditisation that has affected so many packaged goods categories is spreading to products that may have seemed immune. In publishing, the covermount has become almost standard. Even newspapers have taken up the technique by offering free CDs. The effectiveness of these promotions is questioned by some. “People tend to stick to one newspaper. It is treating a newspaper like a packaged goods product,” says Green.

As products grow increasingly alike and the room for price differentiation is limited, packaged goods marketers are left with very limited choices. Promotions that add value look like a good choice, but they also risk dominating the brand. For some categories it might already be too late. According to one agency head, “cereal manufactures now consider themselves toy manufacturers, because that is the currency that makes the difference to their sales.”