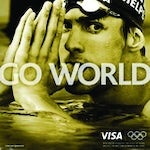 As part of the agreement, Visa is the only payment choice that consumers have to buy tickets by card for the London 2012 Olympics.

Visa credit and debit cards will also be the only cards accepted at shops or cash machines at Olympic venues.

It means that non Visa-cardholding fans will need to buy prepay Visa cards for the duration of the Games to gain access to payment services.

A statement by the OFT says: “The OFT and the European Commission are aware of these issues and are currently in discussion about what action, if any, should be taken.”

London 2012 organisers say that the restrictions are the same as those that were in place at the Beijing 2008 Games and the Vancouver Winter Olympics earlier this year.