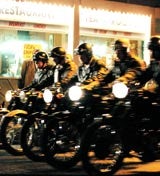 Ogilvy &amp; Mather has created an advertising campaign to promote BP’s cleaner fuels. The global campaign breaks this week and coincides with BP’s re-signing initiative, replacing its old ‘shield’ mark with the new Helios ‘sunflower’ logo. The Helios image will appear on store canopies, fuel pumps and retail pole signs. The TV ads in the UK will run in Scotland, the North-west and the Midlands until December, and will be supported by regional radio and PR. The aim of the ads is to demonstrate BP’s efforts to make its fuels more environmentally friendly. The Helios mark was unveiled in August 2000, when BP repositioned itself as ‘Beyond Petroleum’ in an attempt to establish its green credentials and demonstrate a broader consumer offering.