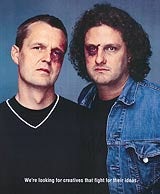 Ever witnessed the hard face of marketing? No, not the tough pitch or the look on the marketing director’s face when the Advertising Standards Authority phones up with a fistful of complaints about the ad campaign you so lovingly created. What the Diary is talking about here is the badass, kick-you-in-the-teeth-as-soon-as-look-at-you marketers. Never heard of them? Neither had the Diary, until it was sent a release from German creative agency Jung von Matt.

The company ran this ad in a German newspaper, in its recent search for new creatives. As you can see from the state of these two, there was obviously a creative disagreement over what the ad should look like. The Diary feels that, rather than attracting Germany’s brightest brains, this pair of bruisers probably scared them off.