I had a definite sense of déjà vu last week. The feeding frenzy around Joost (The Venice Project), the new internet TV service from the founders of Skype, reminded me of the heady days of the late 1990s. This time around, though, the majority of the developments are relevant, accessible and therefore more likely to be welcomed by consumers, so we should be optimistic.

The Joost founders made a big deal about “the broken TV model”, and then proposed something along the lines of TV, but on the internet. I agree with them in that the old TV set-up is losing relevance; however, I don’t think Joost’s new product provides a solution to one of the biggest and most documented issues in media: fragmentation. Joost can launch a cracking internet TV service, but global brands need mass audiences – and nothing moves consumers in a visceral way like a video-based format, such as a TV-style commercial.

I believe that, as is normally the way, it will be the consumer who shows us the way forward, and that technology will provide us with the means. Consider this: Netcraft recently found the internet grew in size by 20% over just seven months last year. That’s a staggering pace of growth. And the fuel? Consumer-created media. 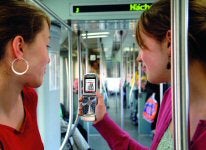 Last year, most people woke up to the concept that young people (that’s those who will define our media future) are watching and circulating links to short-form film that their peers have created or uploaded. This is a direct challenge to the old broadcasters as well as newer ones like Joost.

And the trend is only going one way. It’s simply a matter of time before the mobile industry reluctantly gives up charging consumers for data – the cost of viewing video, for example. Ask yourself this: which will translate better to mobile TV when it becomes more readily available in the next 24 months: a bite-sized short-form relatively low-resolution film, or a long-form potentially episodic work with high-end production values?So what exactly will be the “next thing” in media? If I knew that for sure, you’d be looking at an empty page (to paraphrase Bill Hicks). However, I do think the future will involve the connection of commercials (or commercials 2.0, whatever they may look like) to user-uploaded content. But to reach audiences on a mass scale it will need to be done on a networked basis, that is, across a wide range of sites, and content – and this will necessitate some sort of automated buying and delivery process.

I would assume Google and YouTube are working on a form of AdSense set-up, where word tags relating to videos can be bought. And they’re smart enough to know that they’ll need to give the content creators a cut of the revenue they earn – after all it was those who uploaded films that made YouTube the sensation it became.

However, cutting the consumer in on the deal is one thing: cutting them in on the control is quite another. How about letting the content creators choose which ad they attach to their own film from a selection? They could go for the one that was bidding the most, or they could opt to give their own creation some context by attaching something relevant to or which strikes a chord with their own creation, thereby reversing the usual media principle of the “editorial” content giving the advertisement an associated environmental context.

Our agency research tells us that the majority of content creators are largely males aged under 30, and their motivations are the need to express themselves and their creativity. I’m sure there will be scores of people who would love to enhance their creations by juxtaposing it with the latest brand film from Audi or Adidas, for example.

What are the implications of this reversed set-up?First clients and agencies will have to learn to let go a little, though clearly there would need to be some sort of management and filtering process to ensure the consumer-created content was suitable. However, this isn’t as difficult as it first sounds.

Second, there would be a major emphasis on creativity. I was interested to read Grant Duncan’s piece in Marketing Week (last week), in which he talked about the need to refocus on great creative, and I agree, although for slightly different reasons, as outlined above.

Will it happen? And if it does, will it succeed? Given that few had even heard of the likes of SeeMeTV, Revver and YouTube 18 months ago, and that the democratisation of the Web shows no sign of slowing, I suspect we’ll know the answer much sooner than we think.

Jersey Tourism is launching an advertising campaign to encourage visitors to stay for longer and spend more while holidaying on the island. The ads break this week. The campaign, which has been created by integrated agency Communique360, is backed by Jersey’s Economic Development Department. It comes after the island saw visitor numbers increase by 1% […]

The phenomenon of user-generated content is making waves in the telecoms sector and marketers are keen to take advantage of it, says Robert Lester