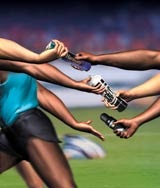 Old, ailing brands orphaned by big packaged companies such as Unilever and Procter &amp; Gamble (P&G) are big business for scavenging smaller companies, which strive to rejuvenate them with new marketing campaigns. But buying and reviving brands that are past their sell-by date can be a risky business, particularly when it means competing head on with similar brands retained by their former owners.

Buck UK, which acquired Sqezy – the washing up liquid formerly marketed as “easy peasy lemon Sqezy” – from Unilever two years ago, faces just such a challenge. It has appointed HHCL &amp; Partners to help relaunch the 38-year-old brand (MW last week) with a &£3m marketing and advertising campaign, targeting younger consumers. This could bring Sqezy into direct competition with Unilever’s Persil and P&G’s Fairy and some observers are doubtful that the move will be any help in revitalising the brand.

Insignia, a male toiletries brand once owned by P&G, is also being relaunched, this time by Edenwest, which last month appointed strategic communications agency Monkey (MW June 27). The family-owned company’s health and beauty division houses other former P&G brands, including Rapport and Mandate.

Buck UK and Edenwest are not alone. Lornamead has been trying to rebuild the Harmony brand since acquiring it from Unilever in 1998. The 45-year-old brand is remembered for its Seventies “Is she or isn’t she?” strapline.

One City analyst says: “Brands that have been dwindling for a while for want of any marketing support will at best trail behind the big packaged goods brands and be fringe players when acquired by smaller companies. I question the reasons for putting money behind these tertiary brands, because they will hardly ever become major players in the market.”

Industry experts say that the likes of Unilever and P&G have other hidden treasures, which might be put up for sale as each company focuses on building global brands. In February 2000, Unilever unveiled its “Path to Growth” strategy,

aimed at disposing of non-core brands. Among those brands that have disappeared are detergent Radion, which has been merged with Surf. And brands such as Oxo and Bachelors have been sold off for competition reasons to Campbell Grocery Products, following Unilever’s acquisition of Bestfoods. In February, Addiction was sold to Conquest Personal Care which has appointed Miles Calcraft Briginshaw Duffy to handle the brand’s &£3m advertising account (MW April 11). There are also persistent industry rumours that Pears soap is to be sold off, but this would put any buyer in competition with Unilever’s Dove brand.

P&G’s Mum deodorant, which early this year saw its market share drop to less than one per cent of the overall deodorant market, is another brand on the shopping list of would-be scavengers.

Other groups, such as Nestlé and Diageo, are rationalising their portfolios. Diageo sold off Cinzano to Campari in 1999 and in the same year, Nestlé offloaded Findus to Swedish investment company EQT. This year, Swiss drugs giant Novartis put the “For Sale” sign up over its Ovaltine and Isostar sports drinks, fuelling rumours that GlaxoSmithKline (GSK) might sell off Horlicks. And earlier this month, Irish industrial company IWP sold its household products division, Jeyes, to Legal &amp; General Ventures (LGV), the former owner of Golden Wonder potato crisps, for 134.2m (&£86.2m).

David Jago, an editorial director at Mintel, says that the brands sold off by global companies often experience a major decline in their profile as they try to compete against large, well-oiled marketing machines.

Lornamead managing director Peter Mangion, an ex-Schwarzkopf marketer, says that the multinationals are selling off brands to smaller players as part of their increasing global focus.

Mangion says: “The big boys are focused on global brands and global markets. That is when companies like Lornamead step in to exploit the value of so-called non-global brands in the local markets. When bidding for a brand, buyers look for economies of scale in marketing and the prospects for using their own trade channels and salesforces.”

Mangion adds that a medium-sized company can give more attention to the marketing of brands that may have been after-thoughts at a big players.

In addition to Harmony, Lornamead has acquired the Stergene fabric conditioner brand from Unilever, following a big dip in the brand’s market share (MW March 14).

In terms of marketing, Mangion says: “We do not need big budgets, because we are not targeting the same consumers as P&G and Unilever. We want the prestige or the niche end of the market.”

One industry rival says those “non-core” brands that have been snapped up by smaller players have very slim chances of survival in the long run: “Brands are jettisoned for a reason – in most cases because they are not moving off the shelves. And I am not too sure whether smaller companies have a better understanding of the brands than the Unilevers and the P&Gs of this world.”

Many companies find it easier simply to kill off unwanted brands, rather than sell them, as it is often difficult to obtain a price that represents value for shareholders. Furthermore, there is the danger of creating a competitor by selling their one-time “big brand” to a smaller company which may give it a new lease of life.

Buck UK, which also owns Frish toilet cleaner – another ex-Unilever brand – and Limelite, formerly owned by Cussons, maintains that it does not want to pitch itself directly against the giants, but is looking to find its own niche.

“We buy brands that have a solid base and that can be nurtured in their own niches.”

But industry experts are unconvinced that Cottam’s plan to aim Sqezy at younger consumers will make competitors sit up and take notice. One buyer says: “The Sqezy relaunch might not threaten Fairy’s or Persil’s position in the market, but it certainly will trigger increased activity. In the long run, it could prove foolhardy to put a lot of money behind a flagging old brand. Consumers do move with the times, and so should brands.”

Value Engineers chairman Paul Walton pours scorn on the idea that reviving old brands is ill-considered. He says: “There is a very interesting money networking culture – people swoop like vultures when big companies are ready to dispose of their brands. The companies and entrepreneurs that buy these so-called ‘non-core’ brands believe in the power of brands.

“It is a chicken-and-egg situation. The reason these brands become non-core is because no marketing support is given to them.”

Walton provides the example of Shloer sparkling fruit juice, a former SmithKline Beecham (SKB, now GSK) brand sold off in 1992 to cider-maker Merrydown. At the time of the disposal, Value Engineers was appointed by SKB to “dress up” the brand for sale. He says: “The Shloer brand has doubled its sales in the past two years. Sometimes, all you need is a good young focused business to bring some energy to a tired brand.”

Merrydown has launched an estimated &£6m TV and press summer campaign through Bray Leino, in an effort to strengthen its position in the adult soft drinks sector.

Buy the brand, get the customers

Deborah Robinson, general manager of Edenwest’s Health &amp; Beauty division, believes that a lack of investment in a brand is often one of the main reasons for a decline in its sales. She says: “Edenwest is a family-owned business and it was necessary for us to look at brands with heritage and customer loyalty, and to acquire them in order to expand the business. What is no longer a core brand to P&G could mean a lot to a smaller company like ourselves and so it makes sense for us to put some marketing support behind it, in order to find newer markets and customers.”

However, she concedes that the new owners of “once-big but now non-core” brands are unlikely to be able to match the packaged goods giants’ marketing expenditure on retained brands and that they will face tough competition to secure shelf space in increasingly concentrated retail outlets. Last year, her division set up a salesforce in a bid to increase retail distribution of its brands, including Insignia.

But Cottam says that distribution channels do not pose problems for brands that have the ability to grow the market and attract a new set of consumers.

One buyer makes the point that minor brands have to compete not only against “big” brands but also against own-label brands for shelf space. He explains that multinationals’ domination of sales channels in supermarkets and multiple retailers make it hard for small suppliers to gain a foothold.

The new “improved” version of Sqezy comes in an “upside-down” bottle – Buck UK claims that this format is a world first in the washing-up liquid market. It may be that innovative pack design has helped the product gain a listing in Sainsbury’s.

Monkey managing partner Mick Rigby says: “Many of the brands that are now being called ‘tertiary’ once helped to create their markets. For instance, when Insignia was launched 20 years ago there was no such thing as a male body spray. The strength of brands like Insignia lies in their heritage, so we now have the opportunity to exploit these strengths and build bigger margins while having lower overheads.”

As big companies streamline their brand portfolios, would-be brand scavengers hover, ready to pick up cast-offs. But what remains to be seen is whether these smaller players will ever be able to bring forgotten brands back to their glory days.

The Incorporated Society of British Advertisers (ISBA) has accused the Financial Services Authority (FSA) of trying to reduce the effectiveness of financial service products’ advertising. ISBA’s accusation follows the publication of a new FSA consultation paper on its latest regulatory plans. The FSA wants to regulate the use of past performance statistics in financial services […]

Conduit, the Irish directory enquiries (DQ) specialist, has appointed Kieran McCourt as marketing director, with a brief to spearhead its assault on the UK’s soon-to-be deregulated 192 market. Kieran McCourt, sales and marketing manager at Irish telecoms leader Eircom, has already taken up his position at Conduit’s Cardiff office. Neither McCourt nor Conduit were officially […]

The Department for Work and Pensions (DWP) has appointed Miles Calcraft Briginshaw Duffy and Zenith Media to handle its payment modernisation business, which seeks to change the way government pays pensions and other benefits. The business is worth an estimated £22m. The agencies presented together and the pitch was overseen by COI Communications. The two […]