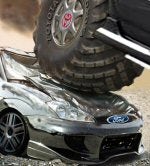 Ford, the once-mighty American carmaker, has hit rock bottom. Its record $12.7bn (£6.4bn) loss for 2006 was compounded by the fact that last year was BMW’s best and is further evidence of the new world order taking shape in the global car industry.

While Japan’s Toyota continues its inexorable march towards becoming the world’s biggest carmaker, the industry’s two most famous names, Ford and General Motors (GM), are fighting for survival. The third of the America’s big three, DaimlerChrysler, has just announced 10,000 job cuts, while Toyota is set for an eighth year of record earnings after reporting a 19% profit rise for the last three months of 2006. It seems the sea change that all but drowned the British car industry is gathering force in the US – and the parallels have not gone unnoticed.

Nowhere are Ford’s woes more evident than in its US heartland, where it is cutting more than 40,000 jobs and closing 16 factories as part of a turnaround plan spearheaded by new chief executive Alan Mulally. The company reported a $6.1bn (£3.1bn) loss in the US for 2006, compared with a $1.5bn (£770m) deficit the previous year, but Mulally, who joined from Boeing in September last year, insists the recovery plan is on schedule. “We fully recognise our business reality and are dealing with it,” he says. “We have a plan and we are on track to deliver.”

Premier Droop
Ford’s Premier Automotive Group (PAG), which includes Jaguar, Land Rover and Aston Martin, also struggled in 2006, posting a loss of $327m (£167m) compared with a loss of $89m (£45m) in 2005. The figures contributed to the worst 12 months in Ford’s 103-year history, and the only ray of hope came in Europe, where the company made a profit of $469m (£240m), up from $73m (£37m) in 2005. Ford and GM have been crippled by healthcare and pension – or “legacy” – costs, but their over-reliance on gas-guzzling sports utility vehicles (SUVs), which are facing a backlash from environmentalists, is also becoming apparent.

Warwick Manufacturing Group associate professor Charles Tennant says/ “The lake has lowered and exposed the overcapacity and lack of profitability in mass-market cars. These problems have been there for a long time but they were hidden by the success of SUVs. Ford and GM are having to wake up to the fact that their business models are no longer valid.”

Ford has been the top-selling car marque in the UK for the past 30 years, selling 344,408 cars in this country last year according to the Society of Motor Manufacturers and Traders. That gives it a 14.25% market share; its nearest rival, GM-owned Vauxhall, has 13% of the market, but its sales were down almost 5% in the UK last year compared with just 1% for Ford.

Ford had a 30% market share in the UK in the late 1980s but lost ground to the likes of Toyota, whose sales have more than doubled in this country in the past ten years. However, Toyota’s achievements in the UK are dwarfed by the gains it has made in the US.

Conquering the US
While in the UK it is still a long way behind Ford with a market share of just 5%, the Japanese giant posted its 11th consecutive year of record sales in the US last year. It also overtook Ford to take the number two spot in the US in January this year, selling 175,850 vehicles compared with Ford’s 166,835.

Former Toyota GB commercial director Mike Moran, who now runs motoring consultancy The Automotive Partnership, says the US holds the key to success on a global stage. “If you look at where the biggest volume shift has taken place it’s been in the US, where the consumer is far more liberal-minded and less brand snobbish,” he adds. “The scale of change in Europe tends to be less aggressive, either positively or negatively, than in the US.”

Ford’s product line-up is generally strong, with the Fiesta, Focus and S-Max all receiving rave reviews from car experts. But chairman of branding agency Corporate Edge, Chris Wood, believes Toyota has raised the bar in terms of quality.

“If you’re going to be in the mass market then anything less than excellent won’t do,” says Wood. “When you’ve got Toyota churning out cars that will do 150,000 miles without needing any attention, then what has been the norm in the past just isn’t good enough any more.”

Another factor that has affected mainstream volume manufacturers such as Ford and GM is the improving quality of so-called budget brands like Skoda, Kia and Hyundai, and the increasing affordability of premium models from Audi and BMW. Moran calls it the “democratisation of luxury brands” and says: “People who can afford to buy a new car for the first time are getting a Kia rather than a Ford, and others who have had seven Fords in a row can now afford a cheap Audi or Lexus. The traditional volume brands are getting squeezed in the middle.”

Ford and GM are not the only car manufacturers to have had question marks hanging over their futures in recent years. Nissan almost went bankrupt before it was turned around by Carlos Ghosn, while Fiat is only just recovering from a disastrous period that many predicted would lead to its demise.

Guy Masters, UK managing director of global motoring consultancy and executive search company Courland Automotive Practice, says: “It is possible to turn around very sick companies that are posting huge losses but you have to get the fundamentals right. If you make a mistake in the car industry it costs you millions, if not billions, of pounds and takes years to put right.”

Ford was criticised last week after it emerged that it is considering paying performance bonuses to its management despite the record loss. But Masters thinks it is important for Ford to stop its executives defecting to financially healthier competitors.

“In a world where product differentiation is getting smaller and there are fewer bad cars around, the way to get a competitive advantage is by having the best people, and Mulally knows that,” says Masters. “Ford has had some extremely capable individuals over the years but has lost many of them. Mulally recognises that Ford can’t afford to haemorrhage any more good people.”

Ford and GM both unveiled plans for environmentally friendly cars at last month’s Detroit Motor Show, but they are playing catch-up as Toyota dominates the hybrid space with its Prius model. In the short term, much will depend on what Ford decides to do with PAG. It has already announced it is selling Aston Martin, but it is still unclear what its plans are for Jaguar, Land Rover and Volvo.

Mondeo Malaise
Much is riding on the launch of the new Mondeo, which goes on sale in the UK in June, but Corporate Edge’s Wood thinks Ford needs to be bolder in its styling across its range: “Ford used to be so dominant. Everyone had a Cortina and then a Mondeo and for that reason no one wants one now. The likes of BMW and Audi, and in the past few years Renault, have been giving people more individualism.”

While most industry experts agree that Mulally is making the right moves so far, cynics point to his predecessor Bill Ford’s 2002 recovery plan that predicted the company would make a $7bn (£3.6bn) profit by 2006.

Whatever the reasons for their troubles, it is clear that Ford and GM must change to survive. The obituaries of British Leyland and subsequently MG Rover are fitting reminders of what will happen if they fail to do so.

Specsavers marketing director Andrew Molle is leaving the company after 11 years. He will be replaced by Boots marketer Richard Holmes. Molle was responsible for introducing a new logo and launching campaigns such as “Should have gone to Specsavers”. He said he was “extremely sad” to be leaving the company. “My time with the group […]

Comparing ad spend growth and consumption patterns in the alcoholic drinks sector provides a valuable lesson for all marketers – strong brands and careful targeting are essential for success.

Mini drivers in the US are being greeted by name when they pass digital posters (MW last week) in the latest example of “proximity marketing”. However, the campaign has reignited the debate about the intrusive nature of hi-tech interactive marketing. Drivers have to register for the Mini campaign, giving their consent. When they sign up, […]