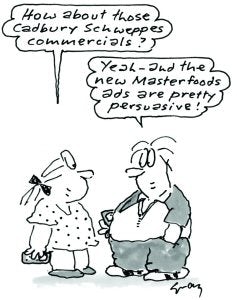 As the Consumers’ Association approaches its 50th birthday, it remains convinced that dastradly brand and marketers are preying on our youth.

There is about the Consumers’ Association a faint whiff of the prig. it goes back to its origins in 1857 when it was founded by Michael Young, later Baron Young of Dartington, who, as an eminent sociologist, was that rare specimen, a walking oxymoron.

He was undoubtedly ahead of his time. In 1957 there were no consumers: there were humbler, more timorous beasts called customers, but since this was the year Harold Macmillan told Britons they had never had it so good, change was in the air. The market stirred, awoke from its post-war slumber and by the end of the decade manufacturers were churning out what economists called “consumer goods”. And so the consumer was born.

Young, however, being a visionary socialist and therefore suspicious of capital and distrustful of the invisible hand of the market, saw a need for a champion to defend the consumer from the black hand of exploitation.

Now as the association approaches its 50th anniversary it would be churlish to deny that it has provided a useful service. Every time a manufacturer comes up with an exciting new product the watchful and indefatigable tigers of Which? pull on their gloves and goggles and test it to destruction. Who can say how many households have been spared the pain of an inferior steam iron thanks to vision of Lord Young? Too many to count.

There is, though, another side to the Consumers’ Association which is also the legacy of its founder, and that is a lasting inclination to see the producer as someone who needs watching, not because he might come up with something good and worthwhile, though that is always a possibility, but rather because he probably has something up his sleeve.

While it is true that among those ranged on the supply side of the equation there are a few who turn up their collars in a meaningful sort of way, producers today are not drawn from the ranks of the villainous and underhand. But no one has told Which?There is about this an ironic paradox. For though it is a subsidiary of a registered charity and accepts no advertising, Which? is driven by a commercial impulse which translates into a need to draw attention to itself, a need that on occasion smacks of silliness, not to mention desperation.

Consider, for instance, a recent attempt by the magazine to create a stir among those whose indignation lies just below the surface ever ready to erupt in foam-flecked rage. According to its report, the wily food manufacturers, who have joined the oil, tobacco, alcohol and pharmaceutical companies in the hall of infamy, are using “underhand” tactics to market products high in fat, sugar and salt to children.

The devious ploys discovered by the sleuths at Which? include free downloads, “viral” e-mails, and the use of sporting heroes in ads.

The 20 dirty tricks discovered by the researchers include websites packed with games, pictures, and free downloads, free toys with children’s meals, and competitions with prizes such as a day at Alton Towers.

The culprits fearlessly named and shamed are Burger King, Cadbury Schweppes, Coca-Cola, Haribo, Kellogg, KFC, Kraft, Masterfoods, McDonald’s, Nestlé, PepsiCo and Weetabix. As nasty a bunch of villains as you’ll meet, and every one a global operator with form as long as your arm. Well, sarge, I’ve heard of some underhand things in my time but preying on the flower of our youth and making them unnaturally fat, that takes the biscuit. If you ask me, hanging’s too good for them.

But let us be serious for a moment. Sales promotion, for that is the offence unearthed by Which?, is as old as advertising and as lawful. Nor is there anything new in targeting children. Back in the 1950s, a tooth-shattering breakfast cereal called Grape-Nuts used the England all-round cricketer Trevor Bailey to promote sales. Not long after, the first plastic submarine surfaced in a packet of cornflakes.

So the Which? report is just another example of the great food hysteria now sweeping the nation. The unhealthy foods, so-called, are harmful only if eaten in excess. They are lawfully made, lawfully sold, and were, until the hysteria took hold, lawfully advertised.

Part of the process of growing up is to learn to distinguish commercial messages from other kinds and there is ample evidence that children attain that ability at an early age. What they eat and in what quantity is the responsibility of parents.

The lobbyists and pressure groups, driven by a dislike of capitalism and an antipathy towards global brands, are using children to justify an unhealthy appetite for bans, prohibitions and other harmful junk.•

Castrol marketing director Vijay Solanki says the brand’s sponsorship of UEFA Euro 2008 is the first major step in a strategy to reposition the product as a lifestyle brand. The BP-owned brand ann-ounced the deal to become global sponsor of Euro…

Marketers could be more influential and make it to the top more often if the defined their role and avoided rivalry with other specialisms.

When a brand first dips its toe in the murky waters of marketing it usually opts for something low-key or traditional. Seabrook Crisps, on the other hand, took a different tack when it launched the first marketing activity in its 61-year history…