The company has recruited former IOC marketer Karen Webb to be director of marketing and communications. She joins from Visit London and the Greater London Authority where, as project director, she led initial work on the Major Event Strategy for the Olympic Park.

She is a former vice president for Image and Marketing Communications at the International Olympic Committee for nearly eight years, leading the development of the Olympic brand, and was also marketing communications manager for the Sydney 2000 Olympic and Paralympic Games.

She replaces Dorothy Fenwick, who has been looking after marketing as an interim.

Webb will be responsible for the overall positioning and promotion of the Olympic Park, which will include the development of the brand marking and communications strategy and event programming. She takes up the appointment on 1 February.

The public sector, not-for-profit, company is still looking to recruit a director of strategy and corporate planning. It has just moved into its new offices in Stratford and is helmed by CEO Andrew Altman. 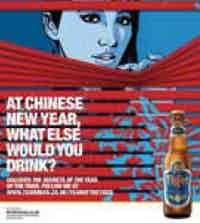 Tiger Beer is using a series of advertisements to encourage consumers to try the beer during Chinese New Year.