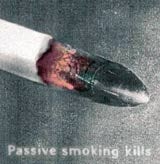 Anti-smoking group ASH has lambasted Ogilvy &amp; Mather after the agency withdrew a “free advertising” promise to avoid an embarrassing conflict with one of its biggest clients, British American Tobacco (BAT).

Ogilvy &amp; Mather created a campaign for the group in June after two of its creative team, Paul Birch and Dave Williams, won a competition for the campaign of their choice with a budget and a six-sheet poster site in Canary Wharf. The two chose to work on an anti-smoking campaign, and asked ASH to be involved.

ASH was told last week that the campaign has been dropped on the orders of chairman Mike Walsh. Director of ASH Deborah Arnett says she is annoyed that the agency felt it had to give in to BAT.

Arnett says: “Business director Edward Thesinger told us that it wasn’t going to happen as Walsh was worried about the conflict of interest with BAT. I’m disgusted as they didn’t even check with BAT whether it would be a problem.”

She adds that ASH intends to use the campaign images created by Ogilvy &amp; Mather on an anti-passive smoking campaign. The poster created by Birch and Williams will be on the group’s website and be used in future communications.

A spokeswoman for BAT says that the decision was made by Ogilvy &amp; Mather and not in consultation with the tobacco company.