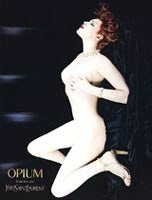 Fragrances and cosmetics company Yves Saint Laurent (YSL) BeautÃ© is understood to have moved its entire European media account out of OMD. The account is believed to be worth £3m in the UK.

The decision is understood to have been made by the Paris office, where the company’s president, Chantal Roos, and the marketing director, Laurent Houel, are based.

The company refused to comment. A spokeswoman says: “Nothing has been decided at the moment. I cannot say a word.”

The controversial Opium advert was created by the company’s in house creative director, Tom Ford.

The cosmetics company was purchased by the Italian luxury goods group, Gucci, in 1999, as Gucci bid to transform itself into a global luxury goods giant to compete with sector leader Louis Vuitton-MoÃ«t Hennessy (LVMH) of France.