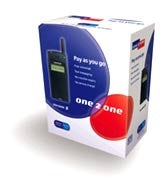 Mobile phone operator One 2 One is phasing out its two existing pre-pay package brands, Up 2 You and More 2 Say, in favour of a new “Pay as you go” generic brand.

The move to one umbrella brand for all of its pre-pay mobile phone products is intended to streamline the market and dispel consumer confusion.

One 2 One marketing director Tim Yates says: “The pre-pay market is becoming increasingly crowded and our proposition will be easy for customers to understand.

“The new boxes themselves mark an evolution from the previous One 2 One pre-pay look.”

The new “Pay as you go” packages will be available from October 2. The rebranding forms part of One 2 One’s programme to extend its “Simplicity” campaign across its products and services.

The campaign attempts to relay the company’s tariffs, packages and services in an “easy to understand” way.

The campaign will be supported by point of sale material for retailers, including dummy boxes and phones, posters and window displays.

The Up 2 You package was introduced in August 1997, and the More 2 Say in September last year.