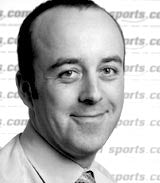 After five years spent working in new media, and particularly online sport, I can tell you that so far 2001 has been about as enjoyable as football on Hackney Marshes on a wet Sunday.

Sentiment has changed rapidly and markedly within the sector, from last year’s “sport has driven other media platforms so it will drive the Net” to the current speculation over how many sports sites are about to go to the wall.

In theory, sports sites can achieve strong customer loyalty, and the provision of live scores, statistics, commentary, and games demonstrates the enormous “stickiness” of sports content online. Throw in Euro 2000 last year and you had the hottest of hot areas.

But we’re going through a much quieter patch for sports at the moment, and the optimism is being tested to the limit. With online ad revenues so unreliable, sports sites will have to distinguish themselves by coming up with other revenue streams.

But even if the content is solid, all websites – and here I’m not just talking about ones in the sports arena – are being hindered by the so-called Web measurement companies.

Some of the often-quoted user statistics only measure at-home use of the Internet, which is clearly inappropriate for sports sites that are commonly accessed in huge numbers by people at work. In the US, measurements take account of this factor, and it’s about time we did the same over here.

At the moment, the reach of many websites is being massively underestimated. For evidence of how laughable many of these UK Web measurement companies’ figures are, you only have to look at the wildly varying figures for the total number of Internet users in the UK – they range from 13.7 million people to 22 million.

In the absence of any other independent data, I understand the need to make use of what is available. But the fact remains that so much of what is portrayed as scientific and accurate – notice how minutely specific some of these figures are – is actually highly misleading.

In March, for example, the site I work for, Sports.com, was the top sports site on one measurement panel (using an audience sample of 9,300) yet failed to even register on another (using 4,500 people). Which would you believe?

Good sites will have an audited number of users, research on those users, and a view on panel-based measurement – just like traditional media companies.

Hopefully, everything will be much clearer in a year’s time. This is still a young business and once the playing field has been cleared of clutter, the survivors will be able to work together to establish clarity.

But, until the smoke has cleared, it would be wise to take these measurement figures with a big pinch of salt.

Paul Wright is group sales and marketing director of Sports.com