Onken is currently launching its new Greek-style yoghurt range, which is supported by a £1m campaign. It will include digital and out-door advertising, social, in-store sampling and point of sale branding.

However, speaking to Marketing Week at the product launch event, Onken’s head of marketing Laura Graham said that the brand’s main focus is 2016, and is planning to increase its marketing spend to £3.5m as well as return to above-the-line advertising.

“We will be significantly upping our investment levels and going back on TV, as the brand hasn’t been on TV since 2012,” she said.

The brand is planning two bursts in January and March next year.

For its 2016 campaign, the brand is keen to engage people on an emotional level.

“We want to talk at a wider level about the fact that modern shoppers generally care about more than just their bodies.

“The campaigns will be about having a happy fulfilled life, rather than one consumed with guilt,” she said.

Both men and women will be targeted, which is a point of differentiation that the brand hopes will set it apart from its competitors.

“Our audience is more wide appeal and involves people who are interested in making healthy choices but aren’t obsessed with calorie counting.

“The product isn’t the most premium offering you can buy, but it is the most everyday and accessible,” she said.

Graham said the reason behind the brand’s absence from TV was a desire to build a strong presence on social media.

Onken also uses its content platform to post videos explaining how its natural yoghurt range can be used in everyday dishes using the hashtag #OnkenTips.

“Social media is so important, because of its 24-hour accessibility that TV doesn’t have. So it was important for the brand to build on that foundation, before going back on TV,” she said.

Graham believes that the choice to invest in social rather than above-the-line has paid off.

“We were happy with the results, because we managed to have a very high engagement level with our Facebook community. We were averaging 5%, while the FMCG average is 1%.”

Figures by AC Nielsen Scantrack show that the total yoghurt market is worth £1.4bn. Onken operates within the big pot category, which is the fastest growing area within the industry. Onken has a 17% share of that category. 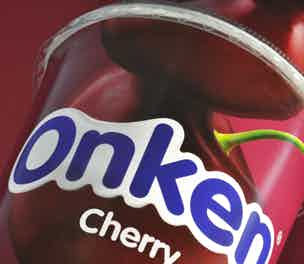 Onken is to launch a £2m marketing campaign to promote a revamp of its yoghurt range as the brand looks to build a following around the enjoyment of eating yoghurt rather than the health aspects.

Yoghurt brand Onken is reviewing its 5m advertising through intermediary the AAR. Incumbent shop South Brand Builders is not thought to be involved. Six undisclosed agencies have been approached to take part in chemistry meetings. German-owned Dr Oetker, best known for its flagship Ristoranti pizza brand, bought the yoghurt manufacturer in 2004. The pitch is […]

Yoghurt brand Onken is understood to have handed its 5m advertising account to Abbott Mead Vickers.BBDO following a four-way pitch…