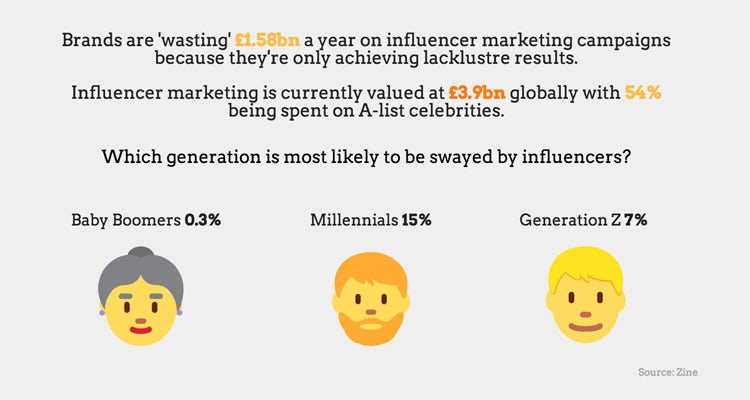 Brands are “wasting” $2.02bn (£1.58bn) a year on influencer marketing campaigns, with many experiencing lacklustre results after forking out for A-list celebrities to promote their products.

However, just 25% of consumers would consider buying a product that had been recommended by a celebrity with more than one million followers, while 50% would be ‘likely’ or ‘very likely’ to purchase an item if it was promoted by someone with a smaller following who was considered a specialist in that area.

Baby Boomers are the most sceptical with only 0.3% saying celebrities would have any positive influence over their purchasing decisions.

By comparison, 15% of millennials would likely to be swayed by a celebrity. 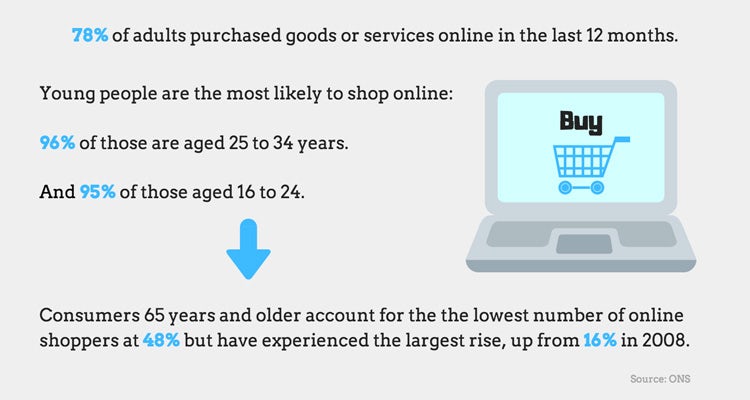 More than three-quarters (78%) of adults purchased goods or services online in the last 12 months, up one percentage point since 2017 and 25 percentage points since 2008.

However, while consumers aged 65 years account for the the lowest proportion of online shopping at 48%, this age group has experienced the largest rise, up from 16% in 2008.

The study also reveals some differences in the online shopping habits of men and women with the latter more likely to purchase clothes or sports goods online (59%), compared with men (50%). While, 35% of men purchased electronic equipment and 29% purchased video games software, other computer software and upgrades, compared to 19% and 15% of women respectively. 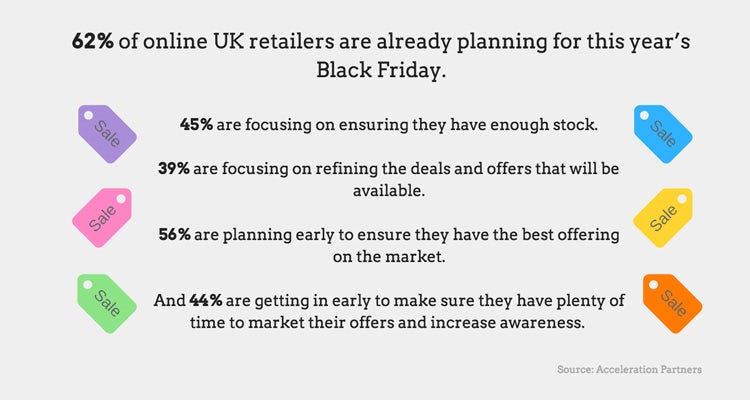 More than three fifths (62%) of online UK retailers are already planning for this year’s Black Friday event, whether that be ensuring they have enough stock or refining their deals and offers.

Of those planning ahead, 45% are focusing on ensuring they have enough stock and 39% on refining the deals and offers that will be available. Retailers are planning early to ensure they have the best offering on the market, cited by 56%, and to make sure they have plenty of time to market their offers and increase awareness (44%).

When asked whether they prefer to have regular offers available or partake in key events throughout the year, 48% of retailers say they rather hold regular offers, while 32% would prefer to get involved with both and 20% opted for key dates. 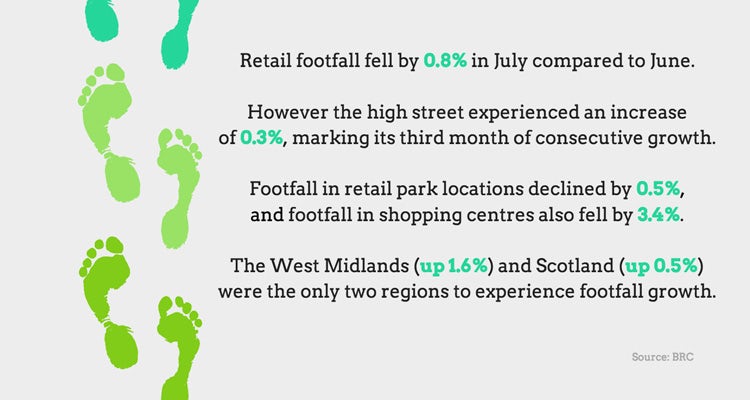 Retail footfall fell by 0.8% in July compared to June, in line with last month’s decline of 0.9% and a decline of 1.1% year on year. However, the high street experienced an increase of 0.3%, marking its third month of consecutive growth.

Footfall in retail park locations declined by 0.5% in July compared to July 2017 when it increased by 1.7%. Footfall in shopping centres also fell by 3.4%, a larger decrease compared to 1.3% year on year. 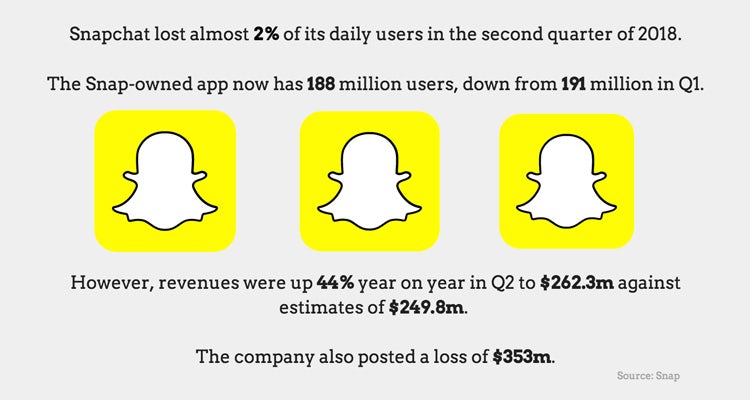 Snapchat lost almost 2% of its daily users in the second quarter of 2018 – the first time the social media app has seen a decline.

The Snap-owned app now has 188 million users, down from 191 million in Q1, a decline that CEO Evan Spiegel blamed on a redesign earlier this year. The drop in Snapchat daily active users “was primarily driven by a slightly lower frequency of use among our user base due to the disruption caused by our redesign,” Speigel says. 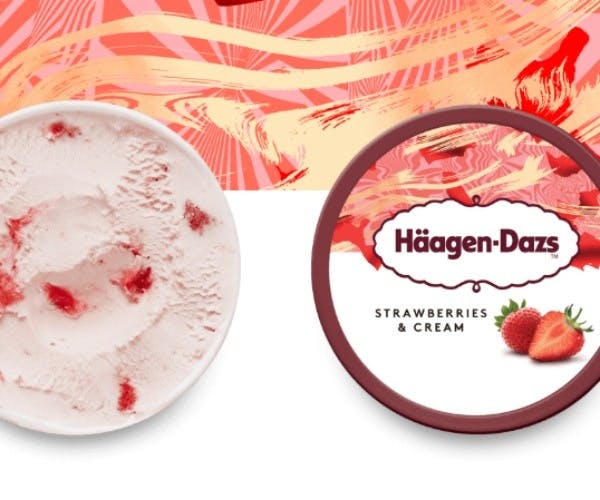 The FMCG company behind brands such as Häagen-Dazs, Nature Valley and Yoplait is exploring how it can upskill its marketers in digital as it looks to better reach consumers online and drive up sales. 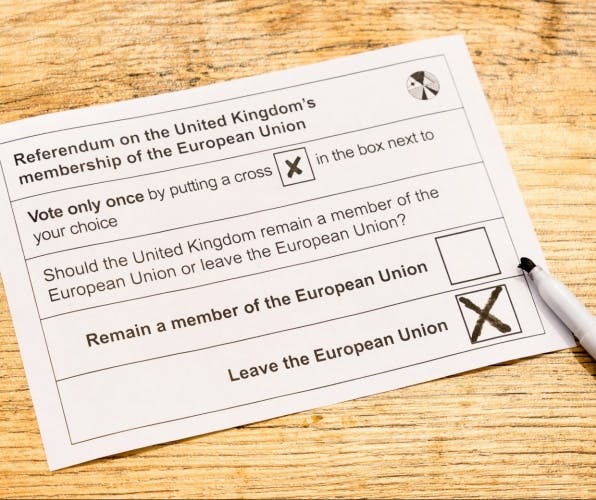 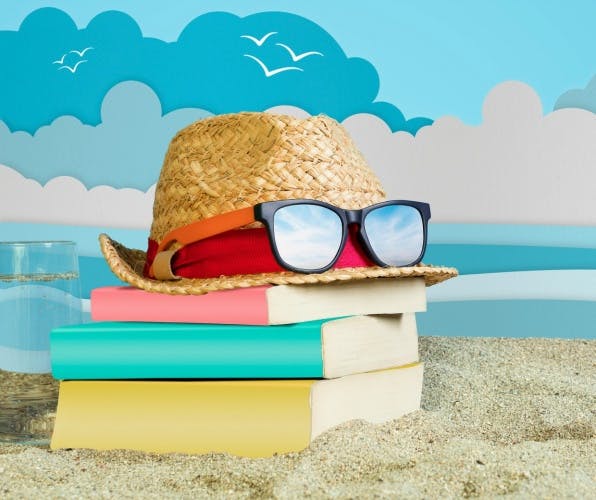