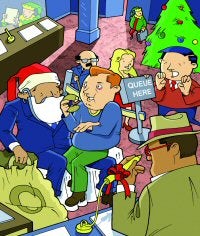 Most of us wouldn’t normally associate Christmas with doughnuts. For some, that might be reason enough for avoiding them as a promotional theme over the holiday period. For others, specifically Lloyds TSB (LTSB), that is precisely what made them essential festive fare.

They took pride of place in the bank’s December 2005 campaign, created by Billington Cartmell, to drive consumer uptake of its American Express credit card. The promotion led with a 0% interest limited-period offer, as well as with rewards in the form of vouchers for high street brands such as Marks & Spencer (M&S), Argos and Dixons.

LTSB retail marketing manager Alex Lane says the bank has actually run plenty of Christmas-themed promotions over the years, and does not think they are ineffective. However, he says: “When we’ve run Christmas-themed campaigns in the past, exit questionnaires have suggested that customers tended not to notice them. In this case, we thought we could create better stand-out with a fresh approach.”

Gold Standard
The strategy appeared to work, notching up over 25% more applications than targeted, and the campaign won a gold in the financial services category at this year’s Institute of Sales Promotion awards.

Lane contrasts LTSB’s campaign with those of other high street banks such as HSBC, with its “January Sale” strategy. “They tend to wrap up some fairly tame offers and products and make them sound exciting,” he says.

The bank does not rule out a festive point of reference in any future campaign, but Lane says: “It would have to be an original take on the Christmas theme.”

Billington Cartmell explains that its experiential agency Closer sent out field marketing teams to distribute doughnuts to both customers and staff at key branches. Lane emphasises the importance of the way an imaginative campaign of this type engages staff as well as customers, motivating frontline personnel to mention the promotion during transactions.

The doughnut theme may have worked well for LTSB and Billington Cartmell, but just how much novelty do people really want at Christmas? When it comes to travel incentives, specialist agency Unmissable suggests that tradition still rules.

Certainly, the company’s range of Christmas incentives is far from static. It now includes ice-skating trips to Paris, first offered last year, and also offers year-round trips for ice-skating in London. In both cases, says managing director Oliver Duval, a spate of ice-rink developments enabled Unmissable to launch the options .

New Year, New You
Another, less traditional, option on offer is the spa break, typically scheduled for January as part of a detox or “new year, new you” theme. In fact, this type of break has grown into a year-round incentive, says Duval. “It is one of the most successful in terms of sales. It’s been driven by demand, by the number of spas opening in the UK and beyond, and by the number of treatments that are available.”

Even further from Santa and sleigh-bells are two niche products which the company is offering this year: having an igloo built in your own garden, and a stay in a “whitepod” in the Swiss Alps. But with the type of third-party consumer promotions that Unmissable specialises in, clients are rarely looking for mere novelty value, Duval says.

This message is reinforced by the appeal of Christmas as a family time, rather than as one for individual, adult pursuits. It is hardly surprising, then, that family holidays to Lapland still figure prominently in Unmissable’s top five Christmas incentives. Trips to Christmas markets in Europe, and shopping in New York, are also growing in popularity.

Seasonal Variations
According to Duval, this fondness for tradition and familiar themes is a peculiarity of the Christmas period. “A lot of our work throughout the year is themed, say, to a brand’s colour, but around Christmas that all goes out of the window. Clients will ditch subtlety and go for the seasonal theme. However, in the period around Valentine’s Day, for example, a number of clients will say ‘we want to be anti-Valentine’s Day’, but that simply doesn’t happen at Christmas.”

In fact, when it comes to retail promotions and incentives, many would go beyond Duval’s observations about tradition, and see anything that cuts across the flow of the festive period as positive madness.

Keep It Simple
Gekko managing director Daniel Todaro believes it is enough to add a seasonal slant to well-tried marketing techniques – no complex, specific strategies are needed. But he adds: “Failure to add a Christmas twist to promotional activity is a missed opportunity for increased sales and strengthening the brand.”

There is a widely-held belief that any subtle message to consumers is likely to be lost in the avalanche of holiday fare. But subtle messages of another kind can be communicated by incentives in a corporate context, especially at this time of year.

One of the aspects of Christmas handouts which sets them apart from year-round incentives is the way in which they invite comparison. Like it or not, your staff will want to know what their colleagues have been given, and draw their own conclusions. Even your customers will be comparing items from different sources.

Don’t Overdo It
The advice from providers is to select the level of each incentive carefully. When dealing with customers, there is also the risk that an over-generous gift may generate embarrassment rather than gratitude. It may appear to be applying pressure rather than simply acknowledging a business relationship.

For these reasons, and to allow a tighter control over budgets, suppliers of corporate incentives are ensuring that they can present as wide a range of gift items as possible.

House of Fraser (HoF), for instance, says it will be offering 15 different gift boxes, from uncomplicated cartons of chocolates to a wine lover’s set, a women’s gift box including champagne and toiletries, and other traditional combinations such as port and stilton.

There is less of a range when itcomes to hampers, says HoF business incentives manager Clare Rutherford, with just three different variants. Nonetheless, she says: “The hampers and gift boxes are tailored far more this year, with fewer products but better quality.”

Naturally, when it comes to flexibility – if not originality – for the recipient, the voucher is still king. It may also provide the donor with the widest range of price points. For a more contemporary alternative, electronic gift cards are available.

The unoriginal and impersonal associations of vouchers may be less of a problem in the run-up to Christmas than many imagine, says Geoff Howe Marketing Communications (GHMC) managing director Ed Hughes.

Part of the reason behind their enduring popularity is that the recipients themselves are likely to use them to buy gifts for friends and family.

In any case, Hughes says, it is as well to remember that gift items are unlikely to be tailored to the individual to any great extent. “There may be 20 or 30 gifts in a trade promotions scheme, but with store vouchers you’re plugging into a huge inventory,” he emphasises.

The effectiveness of vouchers as an incentive was demonstrated, Hughes says, by a promotion a couple of years ago involving Oral B products sold through dental surgeries. Over a minimum order level, surgery staff could accumulate points towards M&S vouchers, in a campaign which ran from September up to Christmas.

GHMC appears to see M&S vouchers as something of a universal currency – certainly where women are concerned. The vouchers also figured in another trade promotion last year, run by Tetley Tea, targeting customers in the catering sector. Orders of teabags over a certain level were rewarded with a 10 M&S voucher.

Men are more difficult, as we all know, when it comes to gifts and incentives. But Hughes believes that “boys’ toys”, or the vouchers that buy them, hold a similarly wide appeal for men.

Decreasing Value
Overall though, he says, the value of individual incentives has fallen over recent years, notably because of greater concerns about transparency in business. “People simply don’t do expensive premiums or incentives anymore. They have too much of a whiff of corruption about them,” he says.

Many companies now have policies of not accepting gifts at all, so any incentives provider needs to be increasingly sensitive to such policies, and offer alternatives, such as offering donations to chosen charities instead.

Who knows? As company finance departments come under increasing pressure to account for every penny, including benefits in kind, we may be seeing more of those cards telling us that we have just paid for a goat in Ghana or a bike in Burkina Faso.

This will be even more likely, since the companies doing the giving will themselves be keen to demonstrate just how ethically concerned and socially responsible they all are. Especially at Christmas time.