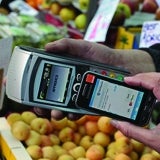 Orange and Barclaycard have launched a mobile payments service that lets users pay for items via their phones at retail outlets including Eat, Pret A Manger and Subway.

The service called Quick Tap lets users pay for items up to the value of £15 in a single transaction by tapping their phones against compatible NFC readers.

Other telecom providers have NFC handsets close to launch. O2 will partner with Visa to deliver its “mobile wallet” contactless payment service in the second half of this year.

Quick Tap sees payments made through a chip in the device’s SIM card, which is connected to a user’s Barclaycard, Barclays debit or Orange Credit Card. Users can then transfer up to £100 to the device.

Users can activate the service via an app that is installed on their device and confirm payment by entering a secure PIN.

Pippa Dunn, Orange VP, says: “Orange Quick Tap is the first of its kind, a service that allows you to pay for everyday items just by tapping your phone wherever you see the contactless payment symbol.

The service launches officially today and will be available to all Orange customers using Quick Tap handsets.

The service will initially be available on Samsung Tocco Lite and Samsung Tocco Quick Tap handsets with other supporting devices to follow.

The launch will be supported by an integrated marketing campaign although exact details of its executions were not disclosed.