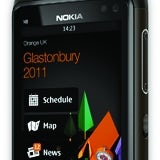 The app lets users plan what acts to see and has an interactive map that lets them plot their movements around the site. It also has news and features content from the Guardian Guide.

Orange Glastonbury is scheduled to launch on app stores from today. Users can also enter a competition to win one of the last remaining pairs of tickets to this year’s festival.

Spencer McHugh, brand director of Orange at Everything Everywhere, says the app, which also has Facebook integration, was aimed at building anticipation in the run up to the festival.