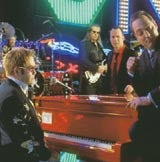 Orange is launching a &£5m advertising campaign featuring Elton John and Stephen Fry next week to promote its new consumer third-generation (3G) service. The campaign has been created by Mother, with Naked handling media planning, and Initiative responsible for media buying. The five-week television, press and outdoor campaign aims to demonstrate how simple the service is to use. The campaign features two executions – one with each celebrity. John uses the video-calling service in Las Vegas and Fry promotes the music services available with 3G. A separate ad will involve an interactive TV element – a first for Orange. The ads use the strapline ‘Orange 3G. It’s 3G peasy’ to illustrate the simplicity of the service. Weapon7 produced the creative work and strategy for the interactive campaign. Orange launched its long-awaited consumer 3G service in December but shunned a high-profile advertising launch, instead opting for a phased approach.

Next time you’re hit by an anti-tank round or tortured for no apparent reason, don’t worry -Âit’s only a nice American, trying to say ‘hello’. By Iain Murray

DDB London has created a television and cinema campaign to mark 75 years of ‘PG Moments’, as part of celebrations for the 75th anniversary of the Unilever-owned tea brand. It features the T-Birds and their reactions to various historical events.

Diageo has signed a multi-million pound sponsorship deal with McLaren that will see its Johnnie Walker whisky brand become the Formula One team’s headline sponsor, as first reported in Marketing Week (December 16, 2004).