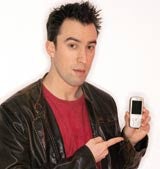 Orange has signed up as the sponsor of the Christian O’Connell Breakfast Show on Virgin Radio. The year-long deal will start when the show launches on January 23.

The deal, which was negotiated by Initiative, will see Orange featured in editorial on the show as well as in branded trails, on-air credits and live reads. It will also include online activity, with a link to the Orange website, to exploit the large number of listeners that Virgin has on the internet.

Virgin and Orange are also looking at ways to extend the sponsorship across other channels to reach Orange customers, including a Christian O’Connell site on the Orange World mobile portal.

Jonathan Barrowman, head of radio at Initiative, says that the deal is “more than a simple badging exercise”.

He says: “It combines the brand properties of strong identity and innovation to bring a new on-air and online experience to radio listeners.”

Virgin Radio sales director Nick Hewat adds: “The breakfast show is any station’s premiere sponsorship opportunity and we are delighted to be working with a blue-chip brand like Orange.”

O’Connell’s show replaces Pete Mitchell and Geoff Lloyd, who presented the breakfast slot on Virgin Radio for three years. His arrival from Xfm is expected to boost Virgin’s share of listening across the country, but particularly in the competitive London market.