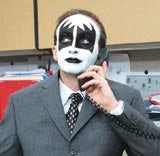 Orange and Wanadoo are to launch their first jointly branded product later this year, in a move that will fuel speculation the two France Telecom-owned companies are to merge.

The joint venture will see the launch of the UK’s first broadband service that will work on both a mobile phone network and fixed-line internet, depending on where customers are located when they connect to the Net.

If customers access broadband at home, they will be connected to internet services via Wanadoo, but if they are on the move the connection will be over Orange’s high-speed third-generation (3G) mobile network. The Orange/Wanadoo datacard will connect customers to the fastest available service.

The announcement follows several years of collaboration between the two brands, which last year resulted in bundled mobile and internet broadband offers. But the datacard will be the first product that Orange and Wanadoo have launched together, and comes amid rumours of a possible merger.

Talks are believed to have taken place last summer and the companies confirmed they had been “working much more closely”. However, they have denied suggestions of a full-scale merger (MW September 30, 2004).

France Telecom is to review the advertising for all its European brands, including Orange and Wanadoo, with a view to consolidating the business (MW February 3).

The company reduced its media planning and buying roster from nine to two agencies in 2003, and says it is likely to do something similar with its ad business. The account is estimated to be worth &£500m.