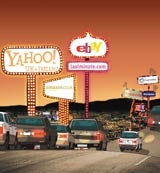 Of the millions that launched, only a few online companies survived to tell the tale of the dot-com crash of 2000, and few looked set to become major profit-earners. But three years on, there is a core of e-businesses with accounts that are escaping the red. David Benady finds out the key to their success

The internet industry is still trying to shake off the “dot-bomb” reputation that it has been stuck with since the hi-tech bubble burst in the summer of 2000. From the wreckage of the downturn, a handful of surviving internet businesses are gradually moving into profit after years of uncertainty. Two big ideas that were talked about at the time of the boom have turned out to be fundamental in sorting the survivors from the failures. Building sufficient scale quickly enough and offering a high degree of personalisation have, according to many insiders, been key.

Yahoo! has spent the past two years clawing its way back to profit from financial turmoil, and last week announced it was creating its first European marketing director’s position (MW last week). The portal has long had the scale, but has only recently learned how to leverage it. Other US online consumer businesses such as Amazon and Ask Jeeves have had some profitable quarterly results, and online auction community eBay claims it was profitable from day one.

But for those who think US brands will dominate the internet over coming years and make it an overwhelmingly American medium, UK sites Lastminute.com and friendsreunited show there are powerful brands being built outside the US. Internet advertising revenue in the UK rose 18.7 per cent to almost £200m in 2002, according to the Interactive Advertising Bureau.

Many companies have bitten the dust since the demise of Boo.com in spring 2000 with the collapse of sites such as Boxman, Clickmango, Easier, Napster, PetsPyjamas, Ready2shop, Thestreet and uTravel. It is estimated that up to 5,000 internet businesses have gone bust in the US over the past three years. Other internet companies have ratcheted up their turnover, moved into profit and are being acclaimed as internet survivors.

But it is not a title that pleases all of them. “A lot of dot-coms aren’t just survivors, they are highly successful companies turning in strong financial performances,” says Adrian Cox, chief executive of internet search service Ask Jeeves UK. He says a lot of internet businesses are making an operating profit of 30 per cent of revenue. “If you are in a mature, offline business, single figures are as good as it gets,” he says. Ask Jeeves in the US moved back into the black in the last quarter of 2002 after reporting a number of quarter results that were in loss.

The internet market has consolidated rapidly over the past five years, and some believe that it is in effect a mature sector, since in many areas there is little room for new entrants.

Most areas of internet provision have their own unassailable players and it seems only the existing bricks and mortar retailers, such as supermarkets, have the strength to muscle in on internet retailing through the likes of Tesco.com.

Forrester Research analyst Hellen Omwando believes it would be difficult for new players to move in on the market of websites such as Amazon and eBay: “These businesses managed to grab a huge amount of scale way ahead of the game. In order to survive in the internet market, they had to get as much critical mass as possible by attracting and developing networks and communities.”

“Scalability” was a much-used term at the time of the dot-com boom. Having scale means that the technology put in place – an expensive part of most online services – is an asset that can be made to sweat as quickly as possible. Many a dot-com company could have survived if it had had more time to attract customers, but most investors were not prepared to wait or did not have confidence in the business abilities of the people running the companies to give them the benefit of the doubt.

But scale also gives some element of confidence in a notoriously insecure market. Omwando says the number one reason deterring people from Web shopping is insecurity, as there are still great fears about paying by credit card and having details stolen or not receiving the goods or services ordered. Scale at least provides a sense of security.

EBay has managed to dwarf competition from similar operations such as QXL and has carved out a substantial lead in the internet auction market. It has used a simple model of constructing communities of people to buy and sell products and has attracted a loyal following in the US and UK. Its product is its consumers.

“We have a simple business model,” says eBay UK marketing and communications manager Jennie Reed. “We don’t hold stock, we are a trading platform that brings people together and we charge a fee. That has enabled us to be profitable from day one,” she adds. According to Nielsen Net Ratings, eBay became the UK’s eighth biggest site in terms of unique users and reach in March 2003.

Many of the dot-com successes have been able to offer people something that they could not get anywhere else. In particular, there are the elements of personalisation and community – so prized by eBay – that are missing from most retail experiences. Amazon’s technology allows it to keep people’s details and turn book buying into a one-click process, and it can also list other books bought by people who purchased the one being ordered. It also has online book-reading communities. Combined with the offer of obscure titles that you often can’t find in a general bookshop, the service has established a strong lead over bookstores and other online sellers.

Piling on the critical mass

The search for scale is one that Lastminute.com has been pursuing relentlessly over the past two years. It has been buying up businesses around Europe as it seeks to gain critical mass. It has just bought Holiday Autos, the leisure car rental broker (MW April 3), and last year announced the purchases of Travelselect.com and the Destination Holdings Group. It also sold its operation in the Netherlands as it was too small to gain the necessary scale, given the strength of players such as KLM.

Andrew Windsor, Lastminute’s recently appointed group head of sales and marketing and a former Thomas Cook marketer, says Lastminute is close to turning over e1bn (£700m) a year. “If you look at the number of dot-coms that have fallen, the secret is getting to scale quickly. Once you build the technical base, you need to sweat it and grow volumes at the least incremental cost.”

Companies that looked like they were on the rocks have clawed their way back. One of the big recovery stories is Yahoo!, which brought in former Warner Brothers executive Terry Semel as chief executive in May 2001 after its advertising revenue crashed, falling to 60 per cent of turnover compared to 85 per cent the year before.

Yahoo! had the scale, but needed Semel to leverage it for profit. He brought in a number of new executives and began to turn the business around, moving away from dependence on advertising subscription and introducing new premium services – over 1 million Yahoo! users have subscribed to new services such as Yahoo! Mail extra storage, Mail forwarding and Personal and Clubconnect services for single people. Last year, Yahoo! reported earnings of $43m (£27m) as opposed to a loss of $93m (£59m) the year before.

Windows to the Web

Yahoo! sits in a group of portals that have survived, such as MSN, Freeserve, AOL, Tiscali and Lycos. Important to the success of the likes of AOL (and other service providers) in the future will be its performance in attracting broadband customers. There is still plenty to choose from in many sectors. Media sites such as BBC Online, Guardian Unlimited and Telegraph.co.uk are still free, though others including FT.com and the Economist have become mainly fee-paying.

There is fierce competition among women’s internet sites, with players such as iVillage, which has been taken over by Tesco, and Handbag.com. IVillage chief executive Philip Rooke believes there are still far too many internet brands around and that there are many set to disappear. “We are still seeing a shake-out, you can see who the clear survivors are. I think 50 per cent of internet brands need to go,” he says.

He believes the clearout in the US was much more fundamental than in Europe as many websites were market-listed, so when they went bankrupt, they disappeared quickly. But in the UK, many have been set up as partnerships between different businesses and the parent companies have been less ruthless in closing down unprofitable sites. “In the US they went from ten women’s sites to one. In the UK it went from seven to four and it needs to go down to two,” he says.

Dot-coms are here to stay, and the internet is still a growing market. But there are precious few niches left for new players and consolidation is continuing. Those left standing after the next three years will be the real survivors.