Over the past few weeks, every out-of-home (OOH) advertising frame in the UK has been given a 10-digit code to automate trading of sites between media agencies and owners.

The code allocator, called Space, will cut man hours and work in OOH ad trading and planning, according to the UK marketing body for the industry, Outsmart, formerly the Outdoor Media Centre.

“Instead of humans having to do hours [of work], machines can talk to each other and do the same work quickly,” explains Alan Brydon, CEO at Outsmart. “In any business, if you can get the functional stuff out of the way, your talented people can spend more time doing what is important – having good ideas and working with customers to get better solutions.”

Another innovation announced this month is from Ocean Outdoor, which is gearing up to launch The Loop Live in 2016. The trading system enables brands to buy OOH advertising by number of ‘impacts’. Advertisers will be able to decide on the audience, time and locations and using that data Ocean’s system will optimise the campaign across screens.

This offering will be rolled out to 20 double-sided digital screens in 12 locations in Birmingham city centre, which offer full-motion, real-time ad placements and are fitted with cameras and NFC technology. The trading technology will also be available for other Ocean Outdoor sites known as The Grid, which consists of eight digital screens in six cities.

These innovations are a few of examples of where OOH media owners have made strides in digital offerings this year, which will change the way brands buy outdoor advertising in 2016. Nearly a quarter of outdoor advertising spend is digital. According to a study by media agency Kinetic Worldwide, the total inventory of digital OOH sites in the UK is set to grow more than 40% between now and 2020.

It is not only in the use of buying automation technology where brands have begun exploiting new digital outdoor offerings, but also the technology installed in OOH sites. For example, Ocean Outdoor’s Media Eyes launched in September with a Virgin Trains campaign at Birmingham’s newly refurbished New Street Station. It has three LED screens with cameras that recognise the gender and age of passers-by. The system is able to select and serve the most appropriate adverts for the audience within the vicinity of the screens. Media Eyes also beams free Wi-Fi for consumers. In exchange, users agree to share data, which can help further refine what to broadcast and select ads the system can push to commuters’ mobile devices.

Battersea Dogs & Cats Home also used a new technique in outdoor advertising this year where a dog followed shoppers around screens in Westfield Stratford shopping centre, asking people to adopt him. The ‘Looking for you’ campaign, created by OgilvyOne in partnership with media owner Exterion on a pro bono basis, used RFID tags placed inside leaflets that were given to passers-by. The tags interacted with digital poster sites so that the dog followed the same shoppers from screen to screen.

Battersea marketing manager Claire Fishersmith says: “For this campaign, interaction was essential. The beauty of the dog-and-owner relationship is the interaction; [the campaign] captured it in an innovative way.”

The digital campaign would be expensive if it had not been pro bono, admits Fishersmith. It is unlikely the charity will repeat the exercise but she believes this type of “innovative and brave” outdoor advertising is something the brand wants to do more.

Outdoor often works well with other channels where interactivity is key to the success of the campaign, particularly experiential marketing. OOH is the lead media channel for ice cream brand Wall’s because it “provides mass reach to people on the go during the summer, prompting impulse purchases” according to assistant brand manager Louise Morley.

Using Exterion Media’s screen at Westfield Stratford, Wall’s combined interactivity on digital sites with a pop-up store at the shopping centre this summer. The brand used personalised interactive messages on the screens to guide people to the pop-up.

“We wanted to do something that Wall’s has never done before and provide an interactive ice cream experience to customers,” says Morley. “The outdoor element was important, reminding people of their love of ice cream through beautiful product shots, bright colours and funny personalised one liners [aimed at shoppers].”

The step change for outdoor this year has been around improvements in real-time ads and allowing brands to be more reactive, which in the past has naturally lent itself to online advertising. However, innovation in outdoor has seen several sites and brands optimise the real-time aspect of campaigns.

For example, Nest, the thermostat that can be programmed using a smartphone, used Clear Channel’s digital screens for a weather-related campaign. The screens changed to remind customers to turn on the heating on the way home and also showed energy-saving messages.

“To be able to change ad copy in real time based on weather, time of day and location allows advertisers to add a level of context that means they can target the right people in an effective way,” says Justin Cochrane, CEO at Clear Channel UK. “This relevance, coupled with OOH’s ability to reach the masses, gives brands the opportunity to create campaigns that are remembered long after they have ended.”

However, digital campaigns come at a cost and this year has shown that a static poster can still have a huge effect on brand awareness. The furore around the controversial Protein World ads on the London Underground is an example.

The level of innovation required therefore depends on the brand objectives. For Battersea’s Fishersmith, outdoor is key as its aim is to prompt an instant reaction from passers-by. “If you were promoting a purely online product, online would be the way to go. Our main objective is to rehouse dogs and cats, [and for people to] want to come and visit us,” she says. “When you’re promoting a product you can see, having an outdoor ad you walk past will draw your attention to the building and you can see messages associated with visiting Battersea.”

Digital outdoor is unlikely to replace static poster sites. Brydon at Outsmart does not believe that the takeover of digital outdoor screens will “continue relentlessly” because “making things digital costs [money] and it has to meet demand”, but he adds that new digital developments such as programmatic buying are making “classic inventory” better too. 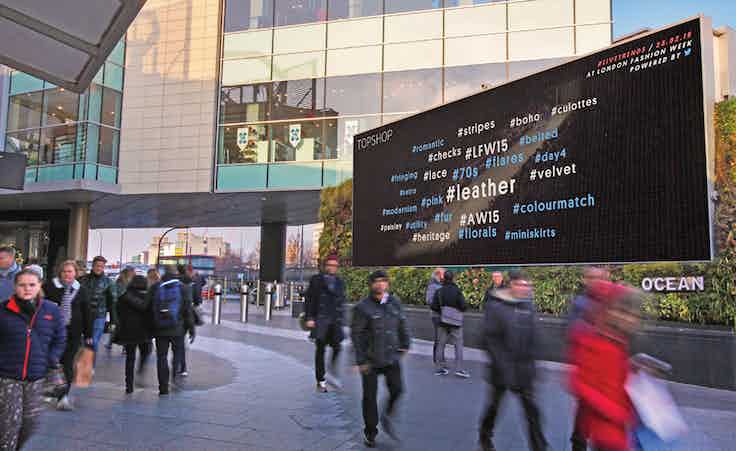 Team GB has announced a new partnership with outdoor media providers Ocean to push live updates ahead of and during The Olympic Games in Rio next year, enabling them to fix a “weakness” in its sponsorship model by proving added media presence for the team’s partners.